From Prom Court to College Royalty 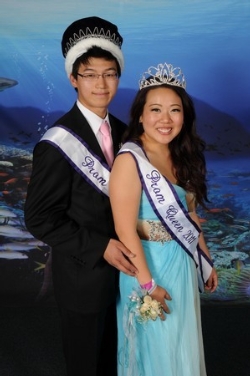 Story By Darren Fishell, DiamondBarPatch
Photo By Pacific Images
He got the crown. She scored the tiara. So where do Diamond Bar High prom king and queen Brandon Sim and Claudine Cho go after prom?
Harvard, of course.
"I think it's a pretty unique situation," Sim said.
While Cho said being named prom queen won't make an appearance on her résumé, the story is one she'll look back on fondly.
"Being up there on court with all of my friends was enough for me," Cho said. "When they called our names it was completely unexpected."
Sim said that while being named prom king was unexpected, some of his friends had begun to speculate before the event.
"Some of my friends were saying (beforehand) that it would be funny if it turned out this way," Sim said.
Becoming prom royalty was a big surprise for Sim and Cho, but both said it was not on the scale of getting into Harvard, which accepted only 6.2 percent of a total 35,000 applicants for the class of 2015.
"I think that the fact that we're here and both prom king and queen is just a testament to how great our school is," Cho said. "Our whole class is so amazing."
Cho, who is also the president of the senior class, said she initially had reservations about applying to Harvard for fear of not making the cut.
"My dream school was USC," Cho said, "and I thought I was going to go there until I allowed myself to dream bigger."
Cho said she will pursue studies in the humanities at Harvard and work toward a career in film production.
Sim, who was also named a U.S. Presidential Scholar this year, said he had no expectations going into his college application process, but he was particularly surprised to be accepted to Harvard.
"I was very happy to get in and I feel lucky to have that opportunity," Sim said.

Sim said he plans to major in physics with a minor in economics to prepare for a career as a doctor or surgeon.
http://diamondbar.patch.com/articles/from-prom-court-to-college-royalty#photo-6260599 Source: DiamondBarPatch
Print