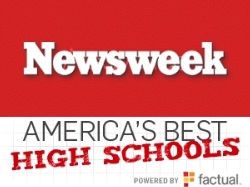 The rating also places the school seventh in the state, which should come as no surprise for given the number of accolades the class of 2011 amassed.

The 804-member class counted among its members two Gates Millennium Scholars, a U.S. Presidential Scholar, a nationally recognized robotics team, and members of the school's performing arts academy made up 25 percent of an honor band composed from schools across all of Southern California.

The school also ranked 25th in a survey by The Washington Post for its performance in preparing students for college.

For the Newsweek ranking, the magazine signed on a panel of experts — Wendy Kopp of Teach For America, Tom Vander Ark of Open Education Solutions (formerly executive director for education at the Bill & Melinda Gates Foundation), and Linda Darling-Hammond, Stanford professor of education and founder of the School Redesign Network — to develop a methodology "that fully reflects a school’s success turning out college-ready (and life-ready) students."

Here's how the Newsweek numbers played out for the Brahmas: