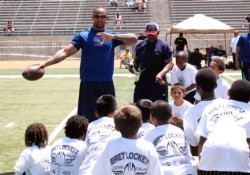 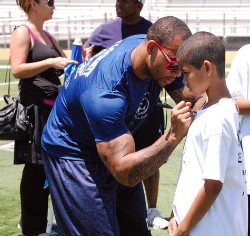 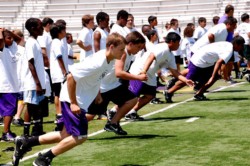 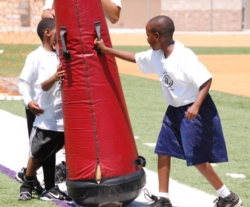 The football camp is a part of Lockett's "Looking Forward Foundation" which he said he formed in order to give back to the community. Lockett, who joined the NFL as a member of the Cleveland Browns as a rookie free agent in 2009 has spent the last two seasons with the New England Patriots as a defensive back.

But before hitting the big time, the six foot one, 220 pound Lockett played at UCLA and suited up for coach Kurt Davies at Diamond Bar. Lockett said it felt great to return to his home town and his old high school for the second year, sharing football tips with young athletes from programs like Diamond Bar's Pop Warner football league.

Alec Flanagan, 5th grader and a member of the Diamond Bar Pop Warner program said this was not his first football camp, but it probably won't be his last.

"I wanted to be out here because I love the sport, I'm dedicated to it," said Flanagan, adding he wants to play in the NFL one day and currently plays middle linebacker and tight end, where he said he enjoys the big hits.

"My advice (to other kids) is football is a fun sport, but you can't sit around and be lazy," Flanagan said. "You have to get up and do something, you have to be dedicated."

Lockett said he was particularly happy to see many parents out on the sidelines.

"I’m glad to see all the parents in the stands who came out to support their kids," Lockett said. "At the end of the day, that’s what really matters: supporting our kids and giving them the support at home to do this."

Lockett said his parents' support was critical in helping him overcome the obstacles he has faced along the way to an NFL career.

By the end of the three hour camp, Lockett — alongside his Patriots teammate Matt Slater, brother Colin who plays football for San Diego State, and Diamond Bar coaches — also spoke about the importance of staying in school and getting good grades.

"You can't play football if you don't have good grades," Lockett said, adding that good grades could be the pathway to any career.

Kids were also given dietary advice, with a warning to:

Rene Zaldivar, a 4th grader from Vine Elementary School in West Covina said he learned to avoid sugary drinks and that working hard is necessary to succeed.