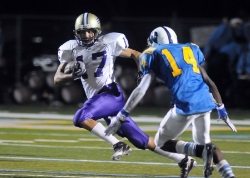 Newly appointed head football coach and Brahmas alumnus Ryan Maine is looking to pull together support for the school's football program with a golf fundraiser this summer.

The team and coaching staff will be joined by Brahma alumni and supporters at the 2011 Diamond Bar High School Football "Scoop 'n Score" Golf Tournament at 2 p.m. on Monday, July 18 at the Los Serranos Country Club in Chino Hills.

Terry Roche, four-time CIF championship winning coach with the Brahmas and one of Maine’s mentors, will be the keynote speaker at the fundraiser.

“I consider Roche as one of my most influential coaches that I have been around” Maine said. “I am truly blessed to have Roche back in the picture."

Proceeds will go to the football program and will also help student-athletes facing financial hardship.

Maine and his coaching staff is looking to bring back the winning Brahmas tradition with the start of Maine’s coaching tenure this fall.

In addition to winning, Maine said preserving relationships and alumni connections is important to the organization.

Brahmas offensive coordinator, Christopher Hernandez is not only a former Brahma but childhood friend of Maine’s. Mike Hernandez, Christopher’s father was a former coach of Maine’s in little league.

“Mr. Hernandez has always been a huge supporter of all of my endeavors,” Maine said.

As a sign of that, the Hernandez family, which owns Camino Real Chevrolet, will be giving away a 2011 Chevy Camero to the first golfer who to get a hole-in-one during the tournament.

The winner of the longest drive, closest to the pin, and 1st, 2nd, and 3rd place teams will win prizes as well.

A great transition into the fall season, the golf tourney caps off summer workouts and will allow an opportunity for alumni and members of the community can network and catch up on old times, Maine said.

To participate, sponsor a hole, or for more information, please visit the Brahmas football website.