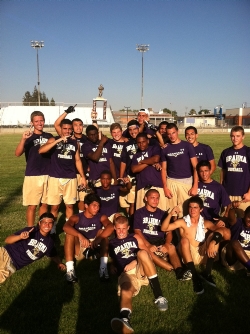 After years of struggle, the Diamond Bar High School football program can use a feather in its cap.

The Brahmas got that on Saturday afternoon by topping 23 other teams to win the SGV Shootout passing tournament at Arroyo High School.

Diamond Bar beat Azusa, last year's tournament champion, 33-30 in the final game. Touchdowns are worth six points and interceptions are worth three points.

"I challenged the kids and told them they have an opportunity to prove a lot of people wrong in the San Gabriel Valley," first-year coach Ryan Maine said. "It's a good moral victory for our kids and we needed that. This doesn't mean anything because West Covina went 0-3 last year (in the Shootout) and won a CIF championship."

Azusa rode the arm of quarterback Jake Martinez to stay close, but each time the Aztecs threatened, Omana hit one of his receivers for a big play.

"We talked all day today about finishing games," Maine said. "In our first couple games today, we didn't finish. We need to learn from today and not think that we're even close to where we need to be."

The Brahmas went 6-4 last season, but due to bad losses in league to West Covina, Bonita, Diamond Ranch and Walnut, they missed the playoffs. Diamond Bar hasn't made the postseason since 2003.

The event started at 9 a.m. with all 24 teams competing in pool play.

Sixteen teams then moved on to the championship portion of the tournament.

"Most of the teams played for free and it's $150 if you didn't play for free. We just want competition and kids to come out and compete.

"I think everybody left healthy and fans got a good show."