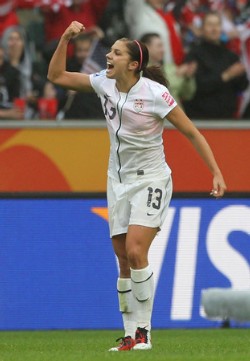 Diamond Bar city officials and residents came together at Chili's on Sunday, July 17, to cheer on Diamond Bar native Alex Morgan, as she and Team USA took on Japan in the Women's World Cup.

Although team USA came up short, the team's youngest player continued to standout on the pitch with a goal and an assist.

Morgan put the U.S. in the lead in the 68th minute to the delight of those watching in Diamond Bar, including city officials who said that Morgan also has helped put the city on the map.

But Morgan wasn't done. With the score tied, it was her assist to Abby Wambach that again gave the U.S. side a one goal lead.

Japan rallied to tie the game late and took home the cup on penalty kicks.

The tournament was Morgan's first time in World Cup competition, where she netted two goals and one assist.