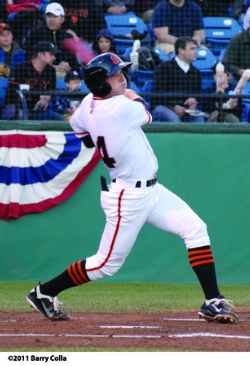 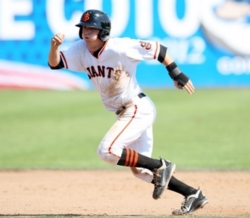 Gary Brown will be the first to tell you, don’t believe the hype surrounding him.

Even if it is well-deserved, don’t believe that he’s the next big thing to hit San Francisco – because if you do, well, he’s probably got a bridge to sell you…

In fact, Brown, the San Jose Giants center fielder and the San Francisco Giants first-round (27th player overall) draft pick in 2010, is simply trying to do his job – one absurdly fast step at a time.

Before bursting on a national stage this summer, Brown was known as one of the all-time stars at Diamond Bar High – witness his No. 22 jersey being retired by the program in 2007. He was named the Sierra League’s MVP, earned all-CIF recognition and was a second-team All-American by Baseball America. Out of high school, Brown was drafted in the 12th round by the Oakland Athletics, but chose to attend and play for Cal State Fullerton.

Currently, Brown leads the California League with 155 hits and is also second in the Cal League with 93 runs scored and 10 triples. He was hitting .319 with a .391 on-base percentage. But he also has 10 home runs and 27 doubles with 66 runs batted in, removing any thoughts by some that he’s just a singles hitter.

“I felt like that’s always been there,” Brown said of his power. “Some have labeled me as a singles hitter. I don’t know where they get that from. I’ve always felt I’ve driven the ball gap-to-gap.”

The nation was introduced to the Diamond Bar High graduate when played in this summer’s Major League Baseball Futures Game, which showcases the top prospects from each MLB organization. He got a hit, stole a base and scored a run in the fifth inning as the United States took a 3-0 lead over the World team. The U.S. won, 8-4.

Brown said he didn’t know Sutcliffe said that about him and appeared humbled.

“I appreciate that,” Brown said. “It’s not something I want to let get to me. I want to work hard and one day, I hope I can have people say that about me. I felt like a big leaguer for a day. I got a taste of what you want to get to. I wanted to get to the light at the end of the tunnel, if you will.”

Overall his skills are strong, yet it is his speed that is grabbing the attention for the 22-year-old outfielder. Brown ranks second in the Cal League with 46 steals.

“He’s a great addition to our ballclub,” San Jose manager Andy Skeels said. “He’s done a lot of things as advertised. He’s a great defender, a better defender than I thought. He’s a shutdown center fielder. Offensively, he steals bases, he drive in runs, he’s got a little power.”

But to watch Brown in person is like watching a blur. In last Monday’s 2-1 win at Lake Elsinore, Brown drew two walks. In the first, he took second on a hit-and-run, which prevented a potential double play – he would have likely stolen second easily. In the third inning, he walked again and also stole second easily. Both times he took a huge jump that makes it look almost unfair to the catcher, takes off and turns on the afterburners, sliding his way into the bag.

On January 26, Baseball America magazine ranked Brown as the fastest base runner and best defensive outfielder in the Giants’ minor-league organization and its No. 3 overall prospect. Considering he is only in advanced single-A ball, that is a huge compliment.

But again, Brown’s not hearing the noise too much.

In addition to the MLB Futures game, Brown played in the California/Carolina Leagues All-Star Game in Modesto, won 6-1 by the Cal League. Brown scored a run and drove in a run as part of a four-run third inning.

“That was fun,” Brown said. “I saw all the guys I played against and they were on my team. It was an awesome experience, plus to see guys from the Carolina League was fun.”

One area Brown has improved in is not being caught stealing, as he’s also second with 15. After struggling a little during the first half, he took off and stole 10 in a row in July and early August.

“I learned to pick my pitches,” Brown said. “I worked with (former San Francisco Giant) Shawon Dunston, our roving running instructor. I slid too early and got stuck before reaching the base. I made some adjustments, and it’s paid off.”

“Everybody struggles, it’s a good thing,” Brown said. “I learned a lot from it. Hopefully I can continue to do things better. Little things I was doing wrong, I had to calm myself, which is easier said than done. Some people struggle in August, I get a second wind (with his parents living in southern California near Lake Elsinore).”

There have been plenty of game accounts where Brown has taken off and scored on a sacrifice fly – from second base. He’s also known for taking the extra base whenever possible, including racing from first to second on supposedly routine fly balls that land in front of less wary outfielders.

That should serve him well as a potential leadoff hitter in the majors, and as a center fielder in an AT&T Park in San Francisco where that area is massive.

“I try to be aggressive,” Brown said. “My legs are my best asset. I try to use that to the best of my ability. If a guy’s taking a play off, if I have the opportunity, I’ll take it.”

Brown set a school record while playing at Cal State Fullerton, hitting at a .438 clip his senior year. He was also the first Titan since 1994 to steal more than 30 bases in a single season. In 2008, Brown set the Cal State Fullerton rookie record for stolen bases, swiping 25 bags in 28 attempts, breaking Dante Powell's 16-year old record of 19 in 1992.

“It was awesome,” Brown said. “The confidence carried over. It taught me even if you do poorly at times, you’ll be fine. I was in a zone.”