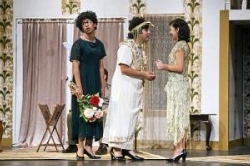 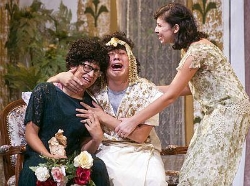 No really, the comedy "Leading Ladies" offers lots of laughs at Diamond Bar High. The Performing Arts Department is performing the comedy by Ken Ludwig again this weekend.

"I've wanted to do `Leading Ladies' for a while, but you need just the right cast to perform it," explained Director Peter Bland. "Think Tony Curtis in `Some Like It Hot' and you'll know what we needed."

On his web site, playwright Ken Ludwig offers this synopsis of "Leading Ladies."

"... this hilarious comedy about two English Shakespearean actors, Jack and Leo, who find themselves so down on their luck that they are performing `Scenes from Shakespeare' on the Moose Lodge circuit in the Amish country of Pennsylvania.

"When they hear that an old lady in York, Pa., is about to die and leave her fortune to her two long lost English nephews, they resolve to pass themselves off as her beloved relatives and get the cash.

"The trouble is, when they get to York, they find out that the relatives aren't nephews, but nieces!

"Romantic entanglements abound, especially when Leo falls head-over-petticoat in love with the old lady's vivacious niece, Meg, who's engaged to the local minister.

"Meg knows that there's a wide world out there, but it's not until she meets `Maxine and Stephanie' that she finally gets a taste of it."

And sooooo, the drama instructor had to find two young men willing to dress up as women for the show. Not an easy assignment at a local high school in the middle of the Friday night football season.

Fortunately, two young actors rose to the occasion - Matthew Tanaka and Ryan Gatus. And they bring a hefty resume to their parts.

This is Ryan's third lead in a play at Diamond Bar. The 16-year-old is playing the part of Jack. Even offstage, the easy going junior seems to have fun.

"I love acting, especially comedy," Ryan said. "I hope to pursue a career in the arts after high school."

His partner in crime is Matthew, who is taking his second turn in a leading role. The 16-year-old last played a lead in last year's production of "Proposals."

While the two don't make the most attractive leading ladies, they are becoming more comfortable in their roles as members of the gentler sex.

"Young actors don't usually have the timing you need for comedy and timing is everything in comedy," Bland explained. "Fortunately, the cast is getting much better with their timing."

"I loved the script when I first read it," Miranda noted. "So I was glad I was chosen for the part."

Though she plans to study business and communications in college, the 15-year-old likes performing in the high school productions. She was also in "Proposals."

This is 16-year-old Krystal's first lead in a production. The senior has performed in the ensembles of other plays.

"I think the play is very funny. That's why I wanted to play Meg," Krystal said. "I was excited when I got the callback from the first round of auditions."

Helping Bland direct the play are assistant directors Rachel McCown and Jazzlyn Parra. The trio directs a talented cast of eight other actors and actresses.

The two story set does a fine job of taking the audience back to middle America in the 1930s. The furniture and set dressing does a good job of setting the time and place.