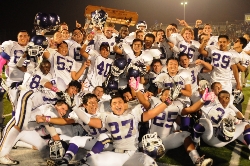 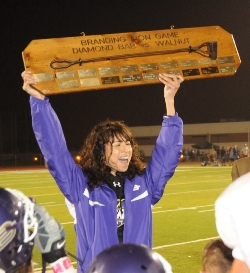 The rivalry between Walnut and Diamond Bar did not disappoint, as the Brahmas got two touchdown passes from quarterback Henry Omana to beat the host Mustangs 26-22 in a Hacienda League game Friday night.

The Brahmas also scored on a 73-yard run by Tyler Brown, who finished with 183 yards on 20 carries.

Walnut's quarterback Chris Mendez threw touchdown passes of 35 and 30 yards, while Cody Lepp scored on both offense and defense, including a 55-yard fumble return.

Down 26-22 in the fourth quarter, the Mustangs still had a shot at winning after Diamond Bar was called for pass interference with less than a minute to play.

But Walnut could drive no further than the 47-yard line and the comeback fell short as Mendez misfired on a long pass attempt in the corner of the end zone.

"That was like an ESPN finish, to come down to the final play, it could have gone either way," Diamond Bar coach Ryan Maine said.