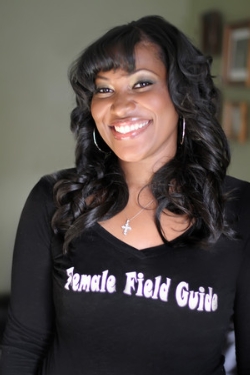 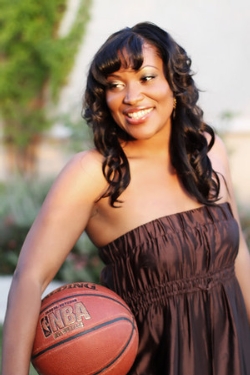 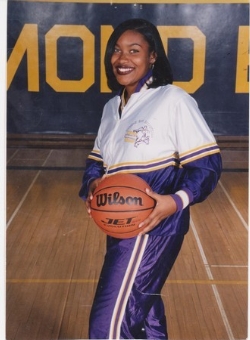 When Gyasmine George graduated from the University of La Verne in May 2010 with her master’s degree in counseling and student services, she thought she would start working with student athletes.

But, as she says, “God had other plans!”

George, a 2000 graduate of Diamond Bar High School and former coach of the Diamond Bar High girls’ basketball team, went on interview after interview in higher education, but with budget cuts and not many openings, she decided to go in a different direction. That’s how her radio show, the Female Field Guide, came to be.

“One day in September 2010, I was on the phone with one of my girlfriends and I was upset because I lost that week in fantasy football,” George said. “My friend had no idea what I was talking about and told me, ‘Gyas, you need to teach a class or something to educate women about sports.’ I had been told this before but really didn’t have the time, energy or creative space to do so. Well last summer with no job and my recent graduation, time and creative space was on my side!”

Her brother, Gerrence, is an actor and comedian, and suggested she get into Internet radio.

The Female Field Guide airs at 8 p.m. Sundays, and is the only Blog Talk Radio show with its own app, available at iTunes and the Android Market. George has interviewed dozens of sports figures, including Luc Robitaille and Joe “Jelly Bean” Bryant, head coach of the LA Sparks and Kobe Bryant’s father.

“I also had the chance to interview one of my mentors, Renel Brooks-Moon,” George said. “She is the public address announcer for the world champion San Francisco Giants and is the first African American woman to announce a professional sports championship series. She was delightful and was such a great interview.”

While the show’s overarching theme is sports, there’s more to it than that.

“Female Field Guide benefits single women looking to add to their stock of sports knowledge as they navigate through the dating scene, girlfriends or wives who desire a closer bond with their men, and the lady or man who has always wanted to learn more about sports in general, but didn't know where or how to gain the information,” George said.

To mark the first anniversary of the show, George will be honored Saturday night at the Female Field Guide’s One Year Celebration. The festivities will take place at Push Boutique and Lounge in Pomona, from 8 p.m. to midnight. George’s brother Gerrence will serve as the event’s emcee, pro athletes will make appearances, and guests will have the opportunity to win prizes.

“It’s going to be amazing,” George said. “With it being Breast Cancer Awareness Month, we will also pass out pink breast cancer ribbons for attendees to wear. We will also be paying homage to those that are fighting, those that may have lost the battle and those that have survived cancer by presenting a gift to our Female Field Guide Breast Cancer Ambassador and survivor of five years Zandra Carruthers.”

John Barge III will be doing a live NFL piece and painting sneakers with autographs from some of the athletes George was friends with while at Diamond Bar High, including Jason Wright and Donte Nicholson. Autographed memorabilia from George’s friends on the Indianapolis Colts, Cleveland Browns, and Arizona Cardinals will also be available for auction.

George is dedicating the event in honor of her father Clarence, who passed away when she was ten.

“He was the first one to put a basketball in my hands and instilled my competitive spirit and confidence on the basketball court that spilled over in every facet in my life,” she said. “It breaks my heart that he won’t be there and I would give anything to have him there.”

Although she is just now celebrating her first anniversary at the Female Field Guide, George is already looking ahead to year two, when the show will also be U-Streamed.

“The second year has such great promise,” she said. “We will be filling the show episodes as well. Think the Dan Patrick Show with a female twist. Dan has his studio called the ‘Man Cave,’ and I will have my ‘Woman Cave aka the Mahogany Lounge’ where I broadcast. Dan’s show is so great, it would be an honor to have anything remotely close to his show.”

In addition to the Female Field Guide, George is also a sports anchor for a show called GAMETIME, which covers Inland Empire high school prep sports, and she hopes that other women can gain inspiration seeing her and others in a usually male dominated field.

“I truly feel that once a woman taps into her worth, knows her true abilities and promise there is absolutely nothing she cannot do,” she said. “If a young woman wants to start her own radio show, business, write a book, go back to school, etcetera, she can do because there is nothing like finding your place and God’s purpose for you on this earth. Your direction then becomes as easy as breathing.”

Through it all, George is grateful for each opportunity that comes her way.

“I am truly humbled by the year that God has blessed me with,” she said. “And I am very appreciative how the city of Diamond Bar and Phillips Ranch has supported and encouraged me all throughout my childhood and upbringing. Who knew this prom queen and former basketball player would be a part of such a cool venture!”