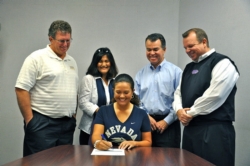 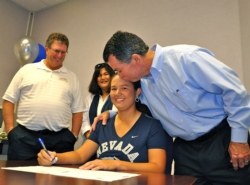 On November 9, with her proud family and coaches at her side, the 17 year-old signed a National Letter of Intent to attend the college next year.

Carly is the Brahma senior captain and an accomplished player because of her unwavering dedication. She practices two hours every other day when she isn’t playing matches that are four days a week during the season.

She entered the Brahma program as a freshman shooting close to 100, but has developed into a scratch golfer in three years.

“I’ve probably taken 20 strokes off my score,” she said. “We work hard on our game so we expect results.”

“She’s come along way in just a couple years – right to the top!” exclaimed Coach Tony McCabe after the signing.

Athletic Director Kurt Davies kidded that he may have had a little something to do with her success after they spent one day on the links together a couple years ago.

“She saw how bad I was and I motivated her!” he said.

Carly had numerous college choices and had narrowed them down to the top three. But it took just one visit to the Nevada campus to seal the deal.

“Nevada was the pick! It was awesome, the coach was the best fit for me, and I’ll have my best future there, “she said.

“Now I just put Nevada in the back of my mind and really focus in on what I’m doing right now, with my studies and with my golf,” she said.

Carly said her entire family is involved in the golf world. She even picked up her first club at the age four on the driving range.

But she chose to focus on softball for the next nine years.

“When I started playing golf with my dad I loved it,” she said.  She changed gears to golf her freshman year.

The girl’s golf team is currently on an exciting run, said Davies.

The Hacienda League Champions were undefeated in league season, went to the CIF Divisionals, and then advanced to the CIF sectionals. About 600 schools competed for this tournament and only four made it, Davies added.

And on Thursday, October 10, six Brahmas will compete in the WSCGA Semi Finals in Murrieta.

If DBHS finihes in the top three, they will play at the State Championships held at the renowned Pebble Beach Golf Course.

“We have an awesome team that is close like a family,” Carly said.

“I always encourage my teammates and tell them to have confidence. That’s how we keep our ‘mojo’ going! You just have to focus on the day of the tournament and know that every shot you make counts. Because sometimes in the finals, it comes down to just one stroke,” she added.

McCabe said the girls would be playing against five top tier teams during the November 10 competition.