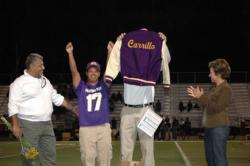 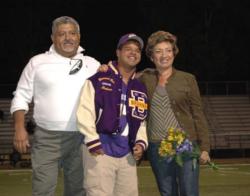 Even before he enrolled at Diamond Bar High School in 2008, Calvin Carrillo was a huge fan of the Brahmas.

“When our son Christopher attended Diamond Bar High School, Calvin attended all of his games, from baseball to football,” Calvin’s mother, Cloris Carrillo, said. “He loved the Brahma Bulls and the cheerleaders, and he looked forward to all of the Friday night games. He spent much of the time around the cheerleaders; they embraced him as well, and he had so much fun with them. One year, the cheerleaders gave him a t-shirt to be part of their squad, and we hoped that when Calvin attended DBHS that he could participate with the football team. Our wish came true.”

Calvin, 17, has Williams Syndrome, a rare neurodevelopmental disorder. Set to graduate from DBHS next year, Calvin spent his high school years as water boy for the football team, and was also involved with track and field. During the school’s recent Homecoming game, Calvin received a big surprise: the athletic department gave him his own letterman jacket.

“Coach Jason Wright and trainer Stacy Camou got together and gave him a letterman jacket right before the game, when the football players were announced with their parents and standing on the sideline,” Cloris said. “They called us up and placed us in the middle of the field and said some wonderful things about Calvin. It was so touching and wonderful, and he was so excited and happy.”

Although Calvin couldn’t play or compete, being part of the team in some capacity was an enriching experience.

“We forever will be grateful to Stacy Camou, as she took Calvin by his hand all four years and made him a part of her staff,” Cloris said. “That’s how he became the water boy, and without her kindness, commitment and dedication to Calvin, he would have not had the experience of being part of the team or made so many friends. We know how much he looked forward to each and every game and event every week.”

The Carrillo family also appreciates the support of Chris Rote, Calvin’s adaptive P.E. teacher, and Linda Munsey, his teacher at the county class, and her aides.

“Diamond Bar High School has been so great with him through the four years he has attended,” Cloris said. “Calvin was embraced by all at DBHS, from the maintenance crew to the Best Buddies students and the athletics department. I could go on and on. It's just been great. I wish he could stay another four years, he loves it there so much.”