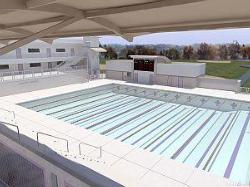 Diamond Bar High is pooling its resources to get something it's always wanted - a new aquatics center.

Instead of busing over to the swimming pool at Walnut High, the Brahmas swimmers will finally have a home of their own.

The $10.7 million facility will be paid through bond measures S and Y, passed by voters in November 2007.

"It'll involve some dust and noise, but we've been waiting for a pool for 30 years," said Diamond Bar High principal Catherine Real, who swam the 500 freestyle in high school herself.

The site has already been prepared with underground utilities, an entrance ramp and a natural gas line. Now, the dirt will begin to fly as Novus Construction begins full-fledged construction of the complex, which will also include a two-story building with 20 classrooms.

"The high school really needed the new classrooms, which will cost $4 million," said Jeff Bloedorn, director of maintenance and facilities. "The new building will allow them to consolidate the math department in one facility."

The district director noted this is just the beginning phase of a modernization project at the local high school. Last summer, giant cranes installed new heating and cooling units at the busy campus.

The grand aquatic center will be one of the cornerstones of the renovation, centered around the 12-lane swimming pool.

Bloedorn said the pool was designed to be as energy efficient as possible, including its pumps and filters.

"We've included the piping for solar heating, which will be added later," he added.

"When you consider Walnut High spends $30,000 a year to heat its pool, we're talking some big savings at the new pool."

In addition to the pool, the center will feature locker rooms for men and women, two fitness classrooms and public restrooms, as well as rooms for coaches and teams.

The facility will also feature a new electronic scoreboard, a small concession stand, and lots of stadium seating with a shade structure.

"With all the decking around the pool, the center will be able to hold almost the entire student body for special events," Bloedorn said.

The pool will be a boon to the Brahma's swim teams.

"Our teams practice in the evenings after the Walnut High teams are finished. Walnut High has been very gracious in letting us use their pool," Real said.

The principal is also looking forward to hiring a water polo coach so Diamond Bar can start its own program.

Still the Brahmas will have to wait two years until the center is completed.