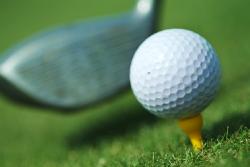 Coach Tony McCabe was named Coach Of The Year for girls' golf. We would like to congratulate the coach, the team, the athletic department of the school for this tremendous honor.