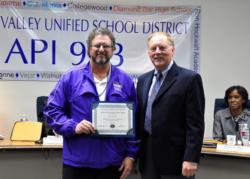 The coach was presented with a certificate of special recognition during the Board of Trustees meeting. He was notified in January that he had won the award.

To be selected for this award, coaches must have experience and a history of excellence in coaching. Every year, one high school coach is named Coach of the Year in each sport, with nominations coming from peers.

During the meeting, McCabe also gave an update on the golf program.