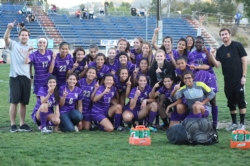 On Friday, February 17, the Diamond Bar High School girls soccer team had a win, while the boys basketball team lost during CIF first round play.

The girls soccer team played at home against Arroyo Grande, winning 2 - 1. Goals were made by Stevie Thomas and Mia Truguerro. The team will next play on Wednesday, February 22.

The boys basketball team lost in an away game to Glendale, with a final score of 56 - 49. Although they were trailing, the Glendale News Press reports that Diamond Bar “clawed back to within four on two occasions in the fourth quarter, forcing Glendale timeouts and creating some nervous moments.”

“We had that little run in the third quarter, but they are so tenacious,” Glendale Coach Steve Snodgress told the News Press. “They kept answering back. They’re a scrappy, tough team.”