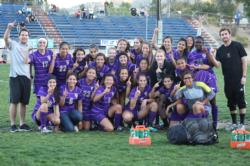 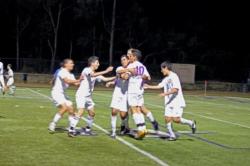 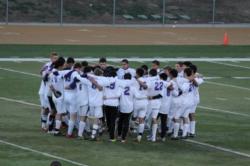 To some, having Diamond Bar High capture the Hacienda League title in boys and girls soccer seemed like a longshot.

Forget that the boys didn’t win a single non-league game, or that the girls came close last year, but couldn’t close the deal. Together, the teams forged a motto of “Double Down,” because they wanted to bring two league titles home.

Don’t bet against them.

For the first time in more than two decades, both teams captured a league title. Both entered the CIF Division 3 playoffs last week and won their first-round games.

Today, the Diamond Bar boys travel to Crescenta Valley for a 3 p.m. second-round game. Their crosstown rival, Diamond Ranch, hosts El Rancho at Ganesha High in a second round game today at 3 p.m.

The Diamond Bar girls, having beat Arroyo Grande, 2-1, in a first-round game Friday, will host Serrano High Wednesday at 3 p.m.

Surprising? Maybe. But not to the people that know how bad these athletes wanted to win.

“We’re not a typical soccer school,” said Brahmas athletic director Kurt Davies. “Weve had a little success here and there. Our boys won a CIF title in 1991, but this was their first playoff win in 17 years.

“Who knows how long it will last? But it’s a lot of fun.”

Davies said the girls have cheered on the boys and vice versa. They both shared the common goal of desperately wanting a league title.

The girls had an easier road. Coach Matt Brummett started building the program last year as a new coach, and had a strong team starting the season.

“As parents, we all knew this was going to be a special season for the girls, but little did we know how special,” said Stacy Stelzriede, whose daughter, Michelle, is on the team. “Despite suffering season-ending injuries for several players, similar to what many other teams have faced, this amazing group of young ladies has dug deep, kept working hard and just never gave up, needing to win their last four games to take the Hacienda league title — and they did!”

With the boys, it was a surprise. They didn’t win a nonleague game. The boys coach, Kemp Wells, runs more of a defensive-oriented, man to man style. Davies said once the kids bought into the system, it really steamrolled.