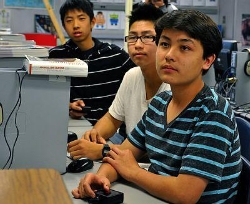 These were some of the issues debated by Brahma Tech students at Diamond Bar High last week. The great debate was part of a week of competition for the Technology Student Association.

The Brahmas recently became the first high school in California to join the national organization, according to technology teacher Alina Gallardo.

More than 150,000 middle and high school students throughout America belong to the association. Members learn about technology through competitions, events and conferences.

"I found out about it on the Internet, then talked to my classmates about forming a local chapter," the 16-year-old explained.

Diamond Bar has more than 400 students in the Brahma Tech Academy. The academy is a specialized math, science and technology program with four career paths.

"Students also have to do 150-hour internships with high-tech companies," Gallardo explained.

It attracts students like 17-year-old Drew Liu. "I want to major in bioengineering in college," the senior said.

Liu was one of the group of students competing in technology week. Earlier, the techies made videos. Participants had to write, shoot and edit a 60-second video in 48 hours.

The next day, the kids competed in a digital image contest. They used multimedia software to process photographic and digital prints on the theme of perspectives.

During our visit, the young scientists were debating bioethics. Should companies that develop genetically altered plants and seeds be allowed to have a monopoly on the products they develop?

The teens debated both sides of the issues under the watchful eye of Gallardo as well as English and science instructors, who had agreed to judge the competition.

Vishal Bhupathiraju, 16, and Carlos Amezquita, 15, were part of the debating team. The sophomores want to go to the national competition in Nashville, Tenn., in June.

"We already submitted our video," Vishal pointed out.

Carlos added that they took 15 pictures for the image contest.

The contestants didn't find out the winners until a showcase and awards program during lunch on Friday.

The Brahmas all "win" by learning more about the high-tech world they live in. Win or lose, the teens have shown they understand the technology that will drive their careers. And the future of America.