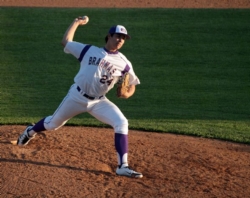 
Diamond Bar High School, the top-ranked team in the CIF-Southern Section Division 3 baseball rankings, was dealt a huge setback with the indefinite loss of senior pitcher Henry Omana, who broke his foot on March 30 in a spring tournament game against Anaheim.

"It was his left foot, his plant foot," Diamond Bar athletic director Kurt Davies said. "He was running down the first-base line.

"He might be out the rest of the season, he might return. We don't know at this point."

Diamond Bar (11-2-2, 3-0 Hacienda League) travels to second-ranked Bonita (15-1, 3-0) on Thursday in what would have been a showdown between two of the Valley's best pitchers for sole possession of first place in league.

If he was healthy, Omana would have presented a great matchup against Bonita's Justin Garza, who is 5-1 with a 0.50 ERA.

Davies said Omana likely needs surgery but is hoping it can wait until the end of the season.

"He's going to have a second opinion on his foot (this week) to determine which path he needs to take," Davies said. "If he doesn't need surgery now, he's hoping that in a couple of weeks he could return and finish the season if he can handle the pain.

"It's obviously tough on him. He wants to play and they're having a terrific season. We'll see what the doctors say and take it from there."