'Fiddler on the Roof' Opens 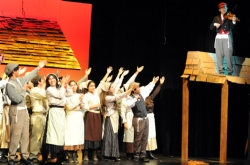 If I were a matchmaker, I'd match the performing arts department at Diamond Bar High with "Fiddler On the Roof." Fortunately, they already have, selecting the perennial favorite for the big spring musical that opens Thursday, April 26, in the high school theater. One would think they'd have a hard time finding someone to play Tevye, a Jewish dairyman trying to raise four daughters in Czarist Russia.

Think celebrated Israeli actor Topol or the legendary Zero Mostel, who made the role famous in the Tony Award-winning musical that ran on Broadway for more than 3,000 performances from 1964 to 1972. Not 17-year-old Charlie Luber. This is the high school student's first big role. But 15 minutes in the makeup chair transforms the soft-spoken young actor into a very likeable Tevye. Charlie actually ages before your eyes from a young, clean-shaven Brahma to an old bearded peasant. And while he may answer questions quietly in the dressing room, Charlie becomes a commanding presence on the theater stage. If anything, the sparkle in his eyes burns even brighter. But while you can disguise almost any actor, it's virtually impossible to hide a weak voice in the lead role of a musical.

So it comes as something of a surprise when Charlie's booming voice reaches out across the auditorium. Tevye's rich bass drawing the audience into the moment. Indeed, the opening moments of the production moves the audience back to another place and time.

From the haunting opening notes from the fiddler on the roof to the carefree dancing of the villagers. The first number "Tradition" establishes the dilemma faced by a loving father of five daughters attempting to keep religious traditions alive while a modern world encroaches on his simple village life. Director Peter Bland fills the simple set with the entire cast, which numbers 68.

They fill the wings as well as the main stage with cavorting dancers. As a matter of fact, many freshmen are filling out the two casts. Catherine Larcheveque, Jackie Aluning and Kali DeCambra are some of the young actresses portraying the strong-willed daughters. Others like Jennifer King portray the villagers.

Of course, Tevye must have his wife Golde. A part played by Liz Meneses and Yasmine Shahbaz.

"This is my first leading role," admitted the 16-year-old Liz. "But I'm not really worried because I'm in the advanced drama class. And I've been in other musicals such as the 'Sound of Music.'"

Mention should be made of Ryan Gatus in the mirror role of Tevye. When we last saw Ryan, he was dressed as a young woman for the fall production of "Leading Ladies." Think Tony Curtis in "Some Like It Hot." From his role as a young woman to an old Jewish peasant, the 16-year-old shows the range of his acting ability. You can see why this is his fourth leading role at Diamond Bar.

His older counterpart can draw on Ryan's experience, but Charlie seems to have the part down pat.

"It's a lot to learn with 11 songs and all those lines," our Tevye related. "But I've been recording my performances so I've been improving." As usual, the high school orchestra adds a great deal to the production. There's something about the energy created by the young musicians. They certainly deserve credit for their hard work and professionalism.

Director Bland said there will be four performances, including a rare Thursday night show.

"The prom is on Saturday night, so we had to move our opening night to Thursday," Bland explained.

"It's a wonderful show. The kids are doing a great job with it," the drama instructor said.