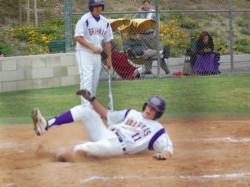 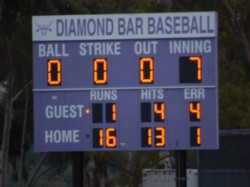 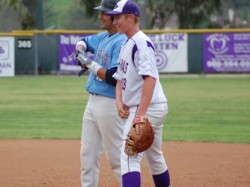 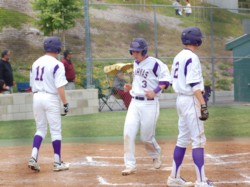 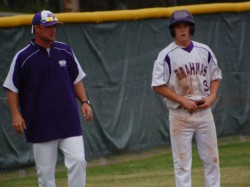 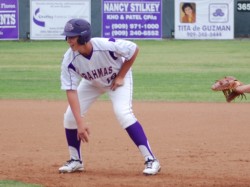 The Diamond Bar Brahmas returned to Hacienda League play after dropping a 1-0 decision to the Loyola Cubs Thursday, April 26, in a non-league game. The Brahmas manhandled the visiting Walnut Mustangs 16-1 Tuesday afternoon, May 1, in a Hacienda League match-up.

“We haven’t had a game like this in a while,” Brahmas head coach Eric Shibley said.  “Last week we were only able to get one, two hits off (Loyola).”

Walnut scored first as Caleb Romo was able to single off of Pererya for one of his two hits off the right hander.  He would later score on Conlan  MacKenzie’s sacrifice fly to give the Mustangs a brief 1-0 lead.

Romo finished with the hot bat, going 2 for 3, with the run scored.  MacKenzie went 1 for 4, and one RBI.

“Credit Pererya,” Shibley said.  “Baseball is a different game when your starting pitcher is able to keep the opposing base runners off the bases while getting great run support from your offense.”

With one out, Diamond Bar would get three consecutive hits off of Chonsky, culminating in a bases clearing 2 RBI single by Sean Patton.  Patton would later score on Casey Kernohan’s RBI single.  Chonsky finally got out of the inning when Michael Pachucha lined out to Nolan Hoff.

Diamond Bar was kept scoreless in the third by Kolby Oriti, who came in the second inning to relieve Chonsky, but was still able to garner five runs off of him.

“We swung the bats well today,” Shibley said. “It’s nice to see everyone, including the bench players to come in and contribute, especially in a game like this.”

The Brahmas carried the momentum from Tuesday’s game into Thursday, as it picked up its third league win in a row, defeating the host Rowland Raiders 6-2.

Henry Omana picked up the win in a game where all the runs were scored in the third inning.

Diamond Bar (15-6-2, 7-3) looks to upset league frontrunner Bonita as it hosts the Bearcats Tuesday afternoon.  First pitch is at 3:30pm.