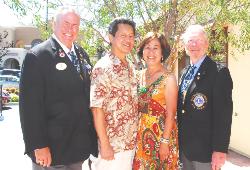 Jack and Wanda Tanaka of District 4-L4’s Diamond Bar Breakfast Lions Club won the top service award in the world at the Lions Clubs International Convention, which was held in Busan, Korea this month.  Out of 1.35 million Lions from 46,000 clubs in 206 countries or geographical areas, they were jointly named Lions Clubs International Lion of the Year.  Only one of these awards is given each year.

2011-2012 District Governor Ken Sherwood from the Ontario Upland Lions and 2012-2013 District Governor Patrick “PJ” Smith from the Brea Lions represented the district at the awards ceremony.  International Director Bob Smith accepted the award on behalf of the Tanakas from International President Wing-Kun Tam. During the awards presentation at which most of the 55,000 Lions at the convention were in attendance, an enormous photo of the Tanakas was shown.

Past Lions International President Kay Fukushima nominated the Tanakas for the award.

District Governor Smith says he was “in total shock.”  “Jack and Wanda,” Smith says “are the most deserving Lions that I know of.  They live and breathe Lions 24/7 and truly live up to our motto ‘We Serve.’  The award couldn’t have gone to a more deserving couple.”

Agreeing with DG Smith, DG Sherwood says, “In the 25 years I’ve known Jack and Wanda Tanaka through Lionism, they have epitomized the Lions International motto 'We Serve.'  They have long been known in Lions as ‘Team Tanaka.’  Their outstanding work with the Lions’s youth organization, the LEOS, is typical of the Tanaka’s leadership, organization and creative skills.”

The Tanakas found out about their award when DG Smith called and left a message from Korea.  Later, after the reality of what it meant to be awarded the Lions International Lion of the Year, Jack shared his and Wanda’s gratitude.

“It is truly the greatest honor we can achieve to be recognized by Lions Clubs International as Lions of the Year, Tanaka said.  “We would like to thank Past International President Kay K. Fukushima for having enough faith in us for honoring us for our volunteer work.  Serving those less fortunate with an outstanding worldwide organization makes us proud.”

Jack and Wanda Tanaka have been Lions for 26 and 12 years, respectively.  During that time, they both have had perfect attendance, were president multiple times and have received many awards.  Among the awards are the Proud Lion, Proud Sponsor, 100% President, 100% Secretary, Club Lion of the Year, District Lion of the Year, District Governor’s Appreciation Awards, Melvin Jones Fellows and the Multiple District 4 (California) Excellence Award. Jack has also received the District President of the Year, and he has served as Region Chair twice, Zone Chair twice and Public Relations Chair twice. Wanda has received the District Secretary of the Year, and she has been on the district cabinet several times.

One of the Tanaka’s most significant accomplishments is their work for a number of years as advisors to Leos clubs at Diamond Bar High School and Chaparral Middle School.  They can be seen at virtually every project of the 336-member Diamond Bar High club and at the 71-member Chaparral club.

Before he retired, Jack was a parole agent for the Department of Corrections and Rehabilitation.  He is a retired Master Sergeant from the United States Army Reserves.  He is currently the Mayor Pro Tem of Diamond Bar.  Before Wanda retired, she worked at Foothill Beverage Company.  The Tanakas have been married 40 years and have resided in Diamond Bar for 36.