DBHS Remembers Those Lost On 9/11 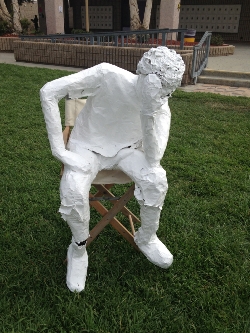 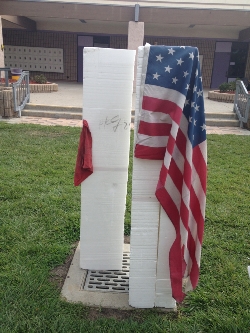 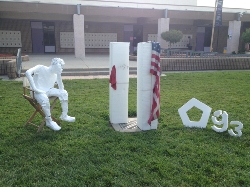 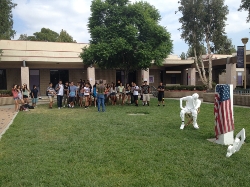 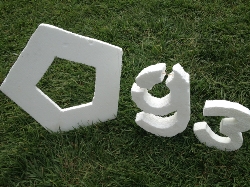 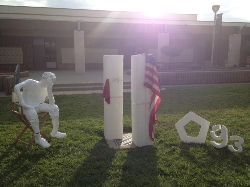 Several white sculptures are on display today at Diamond Bar High School as a tribute to the victims of the September 11 tragedy.

The artwork is displayed in the school's quad and includes a life-sized young man in a chair, a sculpture of the Twin Towers, a Pentagon, and the number 93 representing the flight that crashed into a field near Shanksville, Pa. after passengers fought to regain control of the aircraft.

Their fight kept the hijackers from reaching their intended target.

Hamel selected the teenage boy in the chair created a decade ago in a Fundamentals of Art class because the expression can be interpreted in so many ways, he said.

Students working in groups selected one person to pose with a chair, Hamel said. The piece was formed from poultry wire and covered with white paper mache’.

“I’ve kept this particular one all this time because it is a very interesting piece. It captures what that student was doing at that moment in time,” he said.

Early Tuesday morning Hamel said he added a red scarf to the display after seeing a story on C-SPAN.

The news report featured the story of a man named Welles Crowther was known for always wearing a red bandana his father had given him as a child in Boston. He went everywhere with it. He even wore it playing high school and college sports, according to the report.

Crowther, a stockbroker, was in the second Tower when it was hit, Hamel said.

He survived the initial impact and helped many victims escape the building by leading them down a long flight of stairs.

“All they could see of him through the smoke was his red bandana,” Hamel said. Welles went back up and rescued more people that day, but never made it out himself, according to the report.

“I added a small red towel on the approximate spot where he would have been,” Hamel said.

Hamel explained what the sculptures represented and the meaning of the red bandana to his Fundamentals of Art class this morning. And then asked them to share the story with their friends at lunch.

“It’s not just for him, but for all the hero rescuers who never made it out,” he said.

The school also honored the victims with a moment of silence and then recited the Pledge of Allegiance.