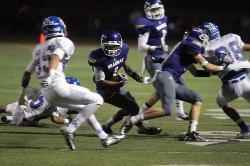 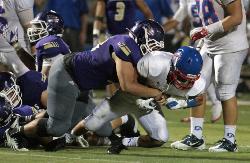 (CLICK HERE TO SEE MORE PICTURES FROM THE HOMECOMING GAME !!!)

After trailing 3-0 on a 37-yard field goal by Los Altos kicker Juan Sanchez, the Brahmas (2-3) scored 40 consecutive points over the second and third quarters.

Diamond Bar sophomore quarterback Tyler Peterson led the way, throwing all four of his touchdowns in the second quarter, including two in the final 90 seconds before halftime for a 27-3 lead.

Peterson finished the game completing 9 of 12 attempts for 231 yards.

"He (Peterson) doesn't care how many touchdowns he has," Diamond Bar coach Ryan Maine said. "He is the most unselfish player we have. Each game he's getting better, in the preseason he was a little nervous, but he's playing really well right now."

The Brahmas defense forced eight Los Altos turnovers. Conquerors starting quarterback Christian Hacegaba tried to play through injury but only lasted one series before giving way without attempting a pass.