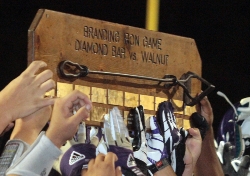 Neither Diamond Bar nor Walnut are having stellar seasons in the Hacienda league but records went out the window as both teams resumed their rivalry for the coveted Branding Iron trophy. The result was a 41-35 win in double overtime as the Brahmas pulled out the home win on Friday night.

Running back Tyler Brown helped Diamond Bar (3-5-0- 2-2) with 25 carries for 234 yards including the game winning touchdown from 20 yards out.

Walnut (1-7- 0-4) got three touchdowns from running back Robert Gonzalez.

Gonzalez finished with 271 yards on 49 carries but it was not enough as Diamond Bar rallied from 21-14 deficit for the win.

"I wanted to see if we could dig deep and show some character. When we play from behind that's what we have struggled with" said Diamond Bar coach Ryan Maine. "I think this a great sign of a team growing up especially a young team like our players."