Football Team Has Great Comeback In Last Game Of Season 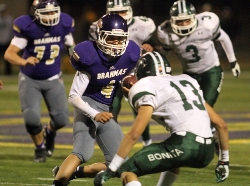 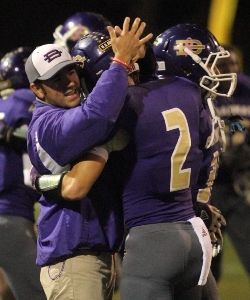 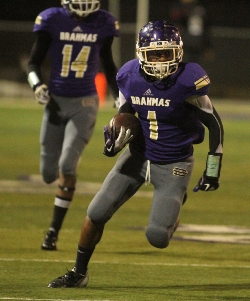 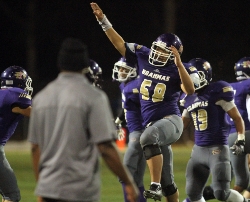 The Brahmas, held to one touchdown in the first half, scored 18 consecutive points in the second half to stun Bonita, which was tied for first place in the Hacienda League, in a 25-24 upset Thursday, November 1.

But Bonita turned the ball over on downs after a pair of sacks by Diamond Bar sophomore Cordell Broadus.

Bonita also was left kicking itself after Brandt Davis missed a short field-goal attempt with 8:39 left that would have extended its lead.

Broadus had a stellar game in throwing for one touchdown, catching another and finishing with 133 all-purpose yards. Tyron Kelley (94), Tyler Brown (59) and quarterback Tyler Peterson (40) collectively gained all of the Brahmas' 193 rushing yards.

Peterson finished 14-of-29 passing for 116 yards, with one touchdown and one interception.

Diamond Bar's defense struggled early against Bonita, which scored on its first four possessions, as quarterback Tanner Diebold (18 of 30, 132 yards) had plenty of time out of the shotgun.

But they effectively pressured Diebold late, sacking him seven times and recording two interceptions, both by J.J. Terrazas. Shane Pitts led the Bearcats' rushing attack with 14 carries for 109 yards and a touchdown. Reggie Turner Jr. had nine carries for 62 yards and a pair of touchdowns.

Diamond Bar, down 24-7, began its comeback with 6:08 left - on, of all things, a safety. Bonita started the drive on its own 11-yard line, and it ended there when a high snap from center sent Diebold scrambling unsuccessfully to retrieve the ball in the end zone.

With 1:47 left in the third quarter. Facing fourth-and-goal from the 9-yard-line, Peterson connected with Broadus at the goal line in single coverage; the receiver sidestepped his defender and walked in for the touchdown.

Terrazas' second interception with 13.5 seconds remaining in the third quarter gave the Brahmas the ball at the Bearcats' 15-yard line. Brown punched in the touchdown from there, and Luzzi's extra point narrowed the gap to 24-22 going into the fourth quarter.