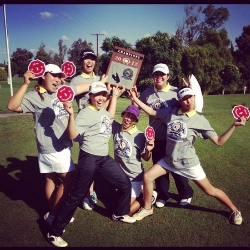 This is the first Girls Golf CIF title in the school’s history.

“She has been stellar the last part of the season,” McCabe said.

Bethany finished top six in the league and then advanced to the Northern Division Individual Championships held at River Ridge Golf Course in Oxnard on October 25.

She competed with the best 100 female golfers in the Southern Section at Sectional Finals on November 2 at Western Hills.

Wu shot three under par and only one other player broke par to earn the coveted title at the challenging course in Chino Hills.

The Girls Golf team vied in the State Qualifying Round on October 29 and placed in the top four which qualified the Brahmas for the Women’s Southern California Golf Association (WSCGA – State Semi-Finals) Championships on Thursday at The Golf Club at Rancho California.

If they finish in the Top 3 this week, they will advance to the State Finals at Red Hill Country Club in Rancho Cucamonga, McCabe said.