Alumnus Named One Of California's Teachers Of The Year 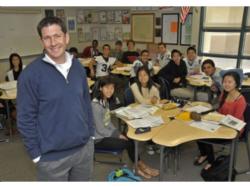 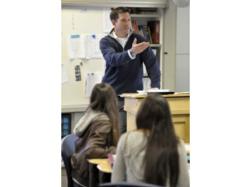 David Goldenberg was a DBHS graduate in the class of 1988.

For Advanced Placement history teacher David Goldenberg, students learn best when they dominate the discussion. His classes at Beckman High School often break into long debates, with Goldenberg standing quietly in the background, as students argue over everything from Marxist ideas to whether 19th-century activists Dorothea Dix or Clara Barton had the greatest influence on the women's movement.

Students often continue the debates after the bell rings, with Goldenberg hearing their arguments in the hallway and, often, hours later in the quad.

"I encourage discussion as much as possible," Goldenberg said. "Having them explain or argue makes them think and conceptualize thoughts better than just simply reading from a book."

His teaching philosophy has led his students to earn among the highest standardized test scores. The philosophy, along with his passion for his work and creativity in his classroom, has also earned him the honor as one of the state's best.

The state Department of Education named Goldenberg on Thursday among five 2013 California Teachers of the Year.

"He is passionate about teaching and you can see it in everything he does," said his principal Adele Heuer. "He also has a gift to engage students in learning that I haven't seen before."

Students in Goldenberg's classes have an average passing rate of 81 percent on AP tests, nearly three times higher than the national average.

Goldenberg was selected in May as one of five 2013 Orange County Teachers of the Year. These winners each received a $15,000 cash prize at a reception at the Disneyland Hotel. As part of the state honor, Goldenberg will travel to countries like Japan and speak to other teachers nationally to share his teaching ideas.

"It's still very hard to wrap my head around being named a state teacher of the year," he said. "It's very humbling because I work with so many great educators at my school alone."

"These five wonderful teachers have shown the kind of skill, passion, and dedication that exemplify the very best of the most important, most demanding, and most rewarding profession there is: teaching," said state Superintendent Tom Torlakson. "I congratulate and thank them all for the work they are doing to brighten the future of their students and our state."

Torlakson nominated Warfield as California's representative for the National Teacher of the Year competition. The national winner will be selected in early 2013.