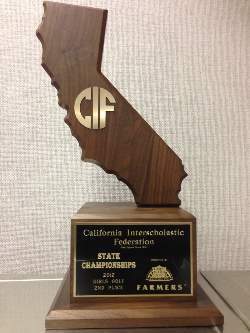 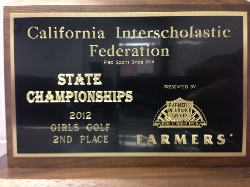 Tony McCabe has a plethora of silver trophies in his house.

The one his Diamond Bar High School girls golf team brought home Tuesday afternoon may be the same color, but that is its only similarity to the rest.

The burgeoning Brahmas program continued its ascent with not only its first appearance in the CIF-WSCGA State championship, but a runner-up finish to three-time state champion Torrey Pines.

Diamond Bar's team total of 420 left it 19 strokes ahead of third-place Mission San Jose. With the first three sets of golfers in the club house, Diamond Bar trailed Torrey Pines by eight strokes, but the defending champions widened the gap down the stretch to post a 401 total.

"We've been chasing Torrance, Palm Desert and Torrey Pines for seven years now, and we've caught everybody but (Torrey Pines)," McCabe said. "It was a great year for us."

Just eight years into its existence, Diamond Bar's program is stronger than ever. The Brahmas, who won their first CIF-SS Eastern Division championship this season, graduate just two seniors from a starting six that includes two freshmen and two sophomores. One of those sophomores, Bethany Wu, won the CIF-SS individual championship this season, another first for the program.

In hot conditions that only increased the speed of the greens on Tuesday, Wu and senior Kristie Yang led the team with scores of 81 on the par-74 course. Torrey Pines' Shiyang Fan won the individual state title by shooting a round of even par.

"I thought I would have to shoot close to even to win it," Wu said. "The course played really tough. The greens were fast and the fairways were narrow. But this season was better than last year and next year we should be just as good."

Diamond Bar has reached the CIF-SS finals seven times and the state semifinals four times. After its second-place finish in state, there's only one barrier left for Diamond Bar to break.

It may have been a first of the negative variety that propelled Diamond Bar to new heights. This season marked the Brahmas' first-ever loss in a league match, a defeat at the hands of Walnut that snapped its dual-match winning streak at 63.

What followed was a CIF title, a clutch performance that included seven collective birdies on the final four holes between Wu and Isabelle Shee to advance by a single stroke to the state semifinals, and an impressive performance to reach the state finals that included a 76 from freshman Josephine Chang.