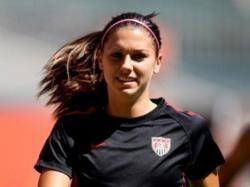 
CLICK HERE to see highlights of her magical year!

The honors keep coming for the player known as "Baby Horse."

Alex Morgan, a Diamond Bar High School graduate, was named the U.S. Soccer Female Athlete of the Year on Monday. The award was chosen based on votes from the general public on Facebook and votes from national media. It was Morgan's first time on the ballot for the award.

The U.S. team has three games remaining as part of its Fan Tribute Tour, all against China -- Dec. 8 in Detroit, Dec. 12 in Houston and Dec. 15 in Boca Raton, Fla.

Morgan is also one of three finalists for the FIFA Women's World Player of the Year honor. Also nominated was teammate Abby Wambach and Brazil's Marta. The award will be announced at FIFA's FIFA Ballon d’Or gala Jan. 7, 2013, in Switzerland.