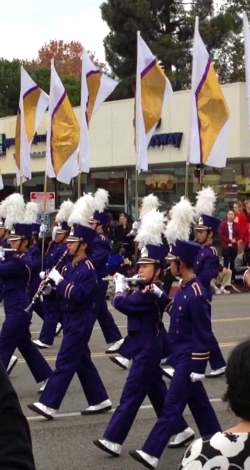 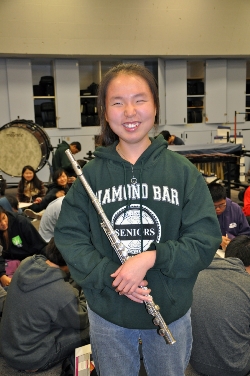 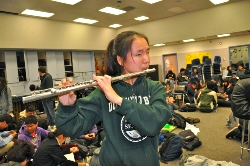 Diamond Bar High School Marching Band member Mi So Kwak will be striding down Pasadena Avenue in the world famous Tournament of Roses Parade on January 1, 2013.

The 18 year-old senior was born blind and hasn’t let it slow her down for a minute.

“She’s incredibly independent, confident, and very talented. She has worked her way through the band and is now a leader in the program,” he added.

“I had the incredible honor of watching Mi So march at the Arcadia parade in November,” said DBHS Principal Catherine Real.  “It left everyone along the parade route with a sense of admiration and appreciation of what a fearless and talented young lady she is!”

Mi So said her mom loves music, so she grew up encouraged to pursue music from a young age.

She began playing the flute in the fourth grade while attending the Seoul National School for the Blind in Korea.

The trumpet was actually her first instrument choice, but it didn’t work out with her mouth and teeth structure. The flute ended up being the best fit with her physical features, she said.

In seventh grade, Mi So continued making music when her family moved to a rural New York town.

At the Rome Free Academy everybody who plays wind or percussion is required to be in the marching band, she said.

Because the director was a little unsure about putting a blind person in the marching band he told her ‘don’t worry about it, I won’t make it mandatory for you,’ Mi So explained.

“That kind of made me mad because I didn’t think it was fair excluding someone because the coach didn’t have the experience,” she said.

“Marching band is something I had wanted to do since middle school,” she said.

So with the help of her friends, Mi So began participating in the field shows.

“And that’s how it started,” she said.

Coming to America definitely brought me closer to music, she said. Band was the only class she wasn’t required to speak, read, or write in English, and she was getting a 90%.

“So when I came to Diamond Bar during my freshman year, I knew it was possible. I brought it up to Mr. Acciani and he was cool about it,” she said.

“We assumed she would just do concert band, but she insisted on learning marching band too. So she’s been doing all our marching band performances for all four years – and doing a fantastic job. And she learns hours of music by memorizing in just days! ” Acciani said.

“When I’m marching in the parade competitions, I have experienced many moments when I feel happy and thankful about life,” Mi So said.

A student guide accompanies Mi So during the performances.

“One band member rotates during each parade and walks along applying pressure to her left arm to help guide her along the route.

“She has to completely trust them marching straight ahead, and it’s amazing,” Acciani said.

“And our students take pride in helping her out,” he said. When they play in the group, kids will have their right foot next to hers and tap her foot so sheknows where to come in, he explained.

The senior flutist is now preparing to trek down Colorado Boulevard as a member of the elite Rose Parade Bands of American Honor Band.

She is currently learning three songs for the 51Ž2-mile parade themed “Oh, the Places You’ll Go” that begins at 8 a.m. in Pasadena.

Mi So knows she will be among the tradition of the floral floats, high stepping equestrian units, and spirited marching bands.

“I think anxiety comes to mind first, although I’m excited. I don’t think it will hit me hard that it’s actually happening until I’m there practicing on December 27,” she said.

“It didn’t seem like a difficult audition requirement, so I just did it,” she said.

But in the middle of the process, it became complicated when the audition recordings that had to be submitted through Smart Music software weren’t compatible with the Screen Reader program she uses.

“I just wanted to stop the process right there, but Mr. Acciani told me to just keep going. Honestly, I didn’t know I would make it in,” she said.

Mi So will once again have a guide at her side for the Tournament of Roses Parade. She is thrilled that her partner will be Casey Bindle, DBHS marching instructor.

Mi So was also recently selected for the Southern California State Honor Band and will perform in February.

“At this point, I feel that music has connected me with many others that I wouldn’t have gotten close to. And I really appreciate all the directors and friendsI’ve made. Especially in marching band – being a guider and marcher – it is truly a special relationship that nothing can replace,” she said.