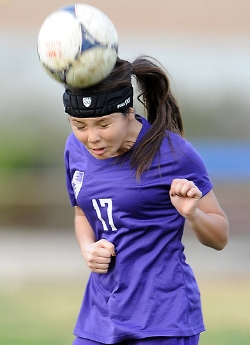 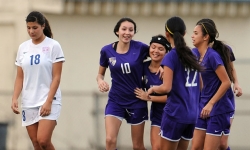 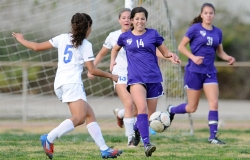 The Hacienda League girls' soccer title may not be decided yet, but defending champion Diamond Bar High School took a giant step in that direction Tuesday.

After a scoreless first half in which Los Altos had numerous scoring chances, Diamond Bar junior midfielder Leah Kolek scored the only goal in the 56th minute to give the visiting Brahmas a hard-earned 1-0 victory over the Conquerors.

"It's big," Diamond Bar coach Matt Brummett said. "(Tuesday) starting out the second half and winning on the road sets the tone for us for the rest of league."

"During the first half, we were trying to find our legs again after a tough game against Bonita," Brummett said.

Los Altos, the Tribune's eighth-ranked team, came out fast in the second minute of the game in an attempt to take advantage of Diamond Bar's apparent fatigue. But sophomore forward Danielle Verduzco missed on a good scoring attempt.

The Conquerors kept the pressure up for much of the half, but lacked a finishing touch.

"You can't allow a team as good as Diamond Bar to stay in it and we did," Los Altos coach Chris Reeder said. "They came out a little sluggish after a tough game (Monday) against Bonita and I thought that needed to work to our advantage.

"In the first half we had tons of opportunities but couldn't put them away. It (the number of shots) speaks to the energy we brought (Tuesday), but it's just that last finish."

Diamond Bar, which has been known for its goals on set pieces this season, found its legs in the second half and, behind some strong throw-ins by freshman defender Sabrina May, began to create opportunities in the attacking third of the field.

The second of May's throw-ins led to the game-winning goal.

"She (May) threw it into the defensive third of theirs and I just got a header on it," Kolek said of the score.