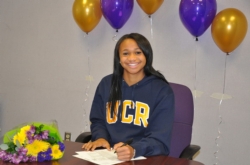 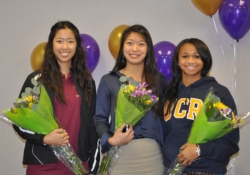 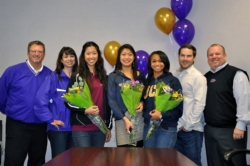 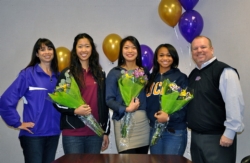 Soccer player Tatum Lockett, golfers Kristie Yang and Isabelle Shee, were surrounded by proud families, coaches, and school officials as they made their longtime dreams a reality.

The athletes were all smiles as they signed to play at the colleges of their choice –the realization of years of hard work and commitment.

‘I’m so proud of our female athletes and very happy to see that their athletic accomplishments have been recognized. Go Lady Brahmas!” said Principal Catherine Real.

Soccer standout Tatum Lockett signed a national letter of intent to play at University of California at Riverside.

“I decided to stick with soccer,” she said after the signing.

She began playing at age three in Diamond Bar AYSO, and then moved to spring and club teams.

“I chose UC Riverside because it’s close to home and my parents love to watch all of us play,” the 18 year-old said.

“I like that my parents will be able to watch me and because I like the system the coach plays now. It will be an easy transition,” she said.

“We won league on Monday and she’s a big part of our successful this year. Tatum kicked in 30 goals this season,” Brummett said.

Golfers Kristie Yang and Isabelle Shee were part of the history-making team that took second place in the State Finals and won the CIF championship his year.

“Kristie and Isabelle have over the last 4 years have lifted the program to its current heights,” said DBHS Golf Coach Tony McCabe.

”This means everything. I feel like I worked really hard for this scholarship. And I feel like it’s all paid off today,” she said.

Yang began playing golf when she was ten years old with her dad and older sister Maggie, a DBHS graduate, who also received a golf scholarship.

Next year, Isabelle Shee will be hitting the links at University of California at Riverside.

“This is a pretty big moment for me,” the 17 year-old golfer said on signing day.

But it wasn't a hard decision for the family.

“My parents actually know the coach (Eric Riley) well and they trust him,” she said.

“It was really special when Isabelle decided she was going to play for him,” said parents Robert and Carolyne Shee.

“And I chose UCR because it’s close,” she said.

Shee first picked up the clubs in 7th grade with the encouragement from her dad.

“My dad started me and I didn’t like it at first. But now I’m better than he is!” she said.

“This year we went farther than we’ve ever gone,” Shee said about their winning season.

“It’s definitely a first and it just kept going well, “ she said.

“Our motto for Brahma Athletics is Purple Pride – Gold Standard, and these three young ladies have exemplified that in all four years here.  It has been wonderful watching them compete and I am sure they will be successful at the next level.  I am also very proud of our coaches for guiding their careers and being great role models for them,” said Athletic Director Kurt Davies.