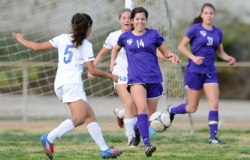 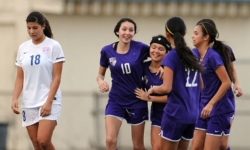 Sophomore Marissa Favela scored the match-winner in the 63rd minute. A Mustangs defender whiffed while trying to clear a direct kick toward the Walnut goal. That left Favela alone in front and she scored easily to break the tie.

"Any time you let Marissa get a chance she'll put it away," Brahmas coach Matt Brummett said.

The Brahmas jumped on top 2-0 on a pair of set plays in the first half.

Junior Sabrina Corpus put bent two corner kicks toward the net. The first one was headed in by Angie Puerta in the seventh minute to give the Brahmas a 1-0 lead.

The Brahmas scored again in the 16th minute when Corpus scored on another corner kick when the ball deflected off a Mustangs player and into the net.

"I've been working on those," she said. "I've been struggling with (corner kicks) but I was on today in the first half."

It started to looked like a replay of the teams' first meeting when the Brahmas took a 2-0 lead and the Mustangs fought back to tie the score.

Cat Gonzalez scored in the 48th minute when Brahmas goalie Tyler Hunt came out of the net to get a loose ball. But Gonzalez beat her to it and rolled in a 20-yard score.

"We have a small team and didn't match up on those corners," first-year Mustangs coach Carlos Guerrero said. "We had more energy in the second half and we were building up and connecting on our passes, but it's always tough to lose on set plays."

The Mustangs tied the score four minutes later when Cassie Duran scored on a penalty kick.

"Walnut is such a good team," Brummett said. "For them to fight back and tie it at 2-2 just shows the character of their team."

The Mustangs (10-6-1, 7-2-1) kept pressure up front the entire second half, but Brahmas defenders were able to counter and get the ball back to the other end of the field to eventually set the stage for Favela's game-winning goal.

"It feels great to win back to back championships," Corpus said. "But beating Walnut, here, feels really, really good.

"I was a little nervous because coming back to tie was the same thing they did the first game, but I knew we weren't going to go down this time."