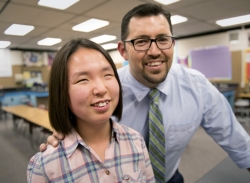 Mi So Kwak's story about her struggle and perseverance is so poignant that she won a $10,000 college scholarship for sharing it.

Kwak, an 18-year-old senior at Diamond Bar High School, was one of 51 people who applied for the GuildScholar Program, a nonprofit scholarship offered only to legally blind people. Although Kwak can perceive light, she has no usable vision and said she doesn't depend on sight 90 percent of the time.

Yet Kwak is in marching band and has a 3.9 GPA. Kwak, with the help of a student guide, played the flute in the 125th Rose Parade.

As one of 16 students who won the $10,000 college scholarship, Kwak had to write about an outstanding teacher. She chose Jose Marquez, a science teacher who taught her in three classes.

"In my 15 years of teaching, she is my favorite student. She reminds me of how anything is possible," said Marquez, 37.

Kwak, a devout Presbyterian, said she will give a tithing of the Jewish Guild Healthcare's money to the Northminster Presbyterian Church in Diamond Bar. The rest will go to her college tuition.

Born in Seoul, Kwak moved to the U.S. when she was 13. Her father wanted his three children to have a better education, so when his company offered him the opportunity to immigrate to the U.S., he took it. The U.S. has more resources and facilities available for blind learners, and its universities are respected worldwide, Kwak said.

Even with the improved learning environment, Kwak still faces challenges. She uses BrailleNote Apex for digital computing and has a screen reader dictate what is on her computer screen. Some teachers recognize Kwak's obstacles and try to lighten her workload.

"It's really easy for teachers to say there's this lab assignment, and you don't have to do this. I'll just excuse you from it," Kwak said. But Marquez "put more work for me because he understood that I wanted to learn as much as sighted students."

Science used to fluster Kwak because it often involves visual concepts and diagrams that are beyond her sight. But Marquez made lesson adjustments so Kwak wouldn't be lost in the dark.

"Mr. Marquez let me touch how the water stream bent when static electricity was applied and (he let me) feel the increase of temperature of a beaker after a chemical reaction took place in it. Science was no longer mere words that came out of textbooks," Kwak said.

When she took science classes in Seoul, blind students couldn't participate in lab experiments. Past roadblocks made her fear taking chemistry in her sophomore year, but Marquez helped dispel these fears, she said.

After chemistry, she took physics in the summer before 11th grade. Then, with Marquez's urging, she took AP chemistry in her junior year. She did well, eventually earning a 4 out of 5 in her AP chemistry exam, thus earning her college credit.

"In class, she'll tutor other kids," Marquez said. "She'll help normal-sighted individuals with AP chem. Because she can't see what I'm writing on the board, her ability to reason allows her to see it more clearly."

Other students see Kwak as an equal even though she is blind. When Grace Chung, 17, was partnered with Kwak for an AP U.S. history class, Chung said she wasn't annoyed or worried.

"Mi So is very ambitious and hardworking. I was excited to work with her. She's on top of everything," she said.

One time, Kwak and her peers had to memorize a presentation in AP U.S. history. The teacher joked that Kwak could cheat by reading off her BrailleNote Apex, and no one would know.

But "no one ever thought she would do that because we know she has integrity. She wants to reach her own goals with her own efforts and nothing else," Chung said.

In fact, Kwak was hesitant about saying she was blind in her college applications because she didn't want special treatment from California and East Coast universities, Chung said. Kwak said she is aware she needs to make a good impression on people.

"I'm kind of an ambassador. For some people, I might be the only person they meet that is blind. I want them to think that blindness is not something that would stop one from achieving what the person wants," she said.

A Diamond Bar High School senior Mi So Kwak, 18, won the $10,000 Jewish Guild Healthcare college scholarship. To win, Kwak had to write an essay about a teacher whose encouragement made a difference in her life. She is pictured with Diamond Bar High science teacher Jose Marquez, who was awarded $5,000 for bringing out the best in the student Feb. 12, 2013. (SGVN/Staff photo by Leo Jarzomb)