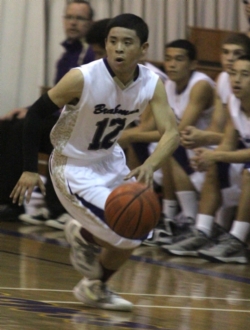 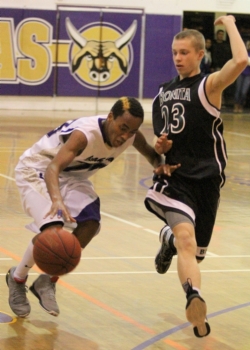 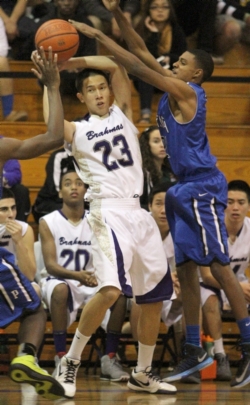 The trio of Marcus Favela, Leo Li and Tristan Velazquez led the way for the Brahmas (13-14), who advance to Tuesday's second round against either top-seeded El Toro or Cabrillo. Favela scored a game-high 16 points while Li and Velazquez added 15 and 12 points, respectively.

Matt Lambrecht poured in 12 points to pace the Del Rio League champion Condors, who finish their season at 20-8.

After building a 31-22 halftime lead, Diamond Bar seized momentum by outscoring the Condors 20-13 in the third quarter.

California tried to put together a comeback in the fourth quarter. The Condors, trailing 53-36, went on a run and managed to reduce Diamond Bar's advantage to 55-50.

The Brahmas, however, went on to secure the win by scoring the game's final nine points.

It was Diamond Bar's first postseason triumph since 2005.

"I'm very excited," Diamond Bar coach Ty Watkins said of Friday's victory. "We have a good, gritty group of kids. California is a fantastic team and they are well-coached. We made some big shots at the end of the game. Making our free throws also helped us a lot."

Carlos Legaspy and Traie Kastl-Givens both scored 10 points for the Condors, who entered the postseason as the division's No. 16 seed.

"Their physical play and ball-presence early in the game (gave us problems)," California coach Jason Van Duyne said. "Our shots were not going in and that led to easy transition points for them. We missed some late free throws and layups in the fourth quarter - and that really took the energy out of us. We made some late shots but it was too late."

Diamond Bar closed the second quarter with a flourish, outscoring the Condors 12-2.

After Legaspy's basket gave the Condors a 20-19 lead, the Brahmas seized momentum when Favela made back-to-back 3-pointers. Diamond Bar then closed the first half with buckets from Bobby Meshesha, Evan York and Evon Shubin.

After the game, Van Duyne thanked his group of seniors who helped lead the Condors to back-to-back Del Rio League titles.

"I would like to acknowledge the seniors," he said. "The last two years, we won back-to-back league championships and won 39 games. I give our seniors credit."