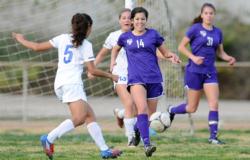 Quarter Finals will be at home Thursday, February 21,  vs. Bishop Amat  at 5 PM

Soccer is supposed to be played with the feet.

"We've been dangerous with that all year," Diamond Bar coach Matt Brummett said. "We have three girls that can toss the ball halfway across the field."

Angela Schmidt's sideline toss in the first 90 seconds of the second half went to Tatum Lockett, who tried scoring on a header. The ball went right in front of Angie Puerta, who was practically standing on the goal line. With goalkeeper Casey Cousineau protecting against the header, Puerta easily tapped the ball into the goal.

"We've had goals like that all season," Brummett said. "This was nothing new for us."

The game was played on the Rebels' narrow field. Flintridge Prep plays most of its games at the nearby Glendale Sports Complex, but Flintridge Prep coach Esteban Chavez said he wanted a home crowd, which the Rebels do not get when they travel to the wider Glendale facility.

"We like it here because we get the fans," he said. "We go to (the Glendale Sports Complex) and no one goes. We like playing here. It's regulation."

The problem is any throw-in near the goal areas is just as dangerous as a corner kick.

"We gave up way too many throw-ins because of the size of the field," Chavez said. "Anything we cleared goes out, and that's dangerous."

Chavez said he knew it would be a problem if Schmidt or Sabrina May hit their marks.

"They were so direct and we were just clearing it," he said. "When you clear it, it goes anywhere. I knew if they would score it would be on the long throw because they are good. They are dangerous. Other than the throw-ins, I don't feel they were any better than us."

"It just feels so good," she said of the win. "I was proud that I could just be there when the ball came. It's a smaller field than we're used to, but it was comfortable to play in."

Neither team had exceptional scoring opportunities.

"It was a very defensive game," Brummett said. "The ball was in the middle of the park. We were fortunate to get that one goal in there to get us the lead and get us the win."

The Rebels' top forward, Kaelin King, had only one shot opportunity, which quickly was stopped by Tyler Hunt in the second half.

"The midfield was where the main battle was," the senior said. "It rarely got out of there. This is going to sting for a little bit."

The Brahmas will host Bishop Amat, a 4-3 winner over Righetti, on Thursday.