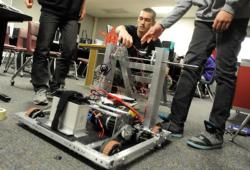 The flying disc flew out the door, across the courtyard and landed in front of the door to the woodworking shop at Diamond Bar High.

The robotics team was testing its latest creation. A mechanical marvel that can not only throw a flying disc with amazing accuracy but pick them up.

Team DBotics has been working on the robot for the past six weeks. They had to finish by Tuesday for the FIRST (For Inspiration and Recognition of Science and Technology) regional competitions in San Bernardino March 28-30.

The Brahmabot will compete against robots from 20 other high schools. May the best robot win!

DBotics is still working on a name for their robot. R2D2 and 3CPO were already taken, so they thought they might call it Stalin to intimidate the other teams.

Stalin has been programmed to shoot flying discs into goals that are 19, 81 and 108 inches high off the floor. The robot scoring the most goals wins the contest. Go, Stalin!

The bots will play in teams of three. It will be quite a battle as six robots battle it out.

Regulations require the four wheeled marvels to fit into a 54 inch cylinder with their arms fully extended. As we watched on Saturday, the young engineers began disassembling the two long metal arms that scoop discs off the floor.

Another team studied the two motors that spin the rubber wheels that shoot out the flying discs with a tremendous force.

"It's actually pretty accurate. They hit the target five out of seven times in our latest test," said Brandon Antillon, an adviser from the Center for Robotics Engineering at Mt. SAC in Walnut.

"The high school students have done an impressive job. They been working 25 hours a week after school and Saturdays to finish their entry," noted the 24-year-old engineering student.

Antillon said the advisers didn't do any of the work. "We're just here to double-check their construction to make sure it's done safely," he said.

"They had no budget, no advisers, no mentors and no support. They were going to try and put together a community team. We turned all that around and got them to where they are today," said Rucker in another interview.

DBotics built their robot from scratch, no prebuilt kits for the purple and gold. Of course, that gets a little expensive with hundreds of parts ranging from metal frames to computer brains.

"We had to buy everything we needed, including 17 electric motors. Some of the parts like the control unit cost more than $500," said Joseph Maa, the 16-year-old junior in charge of logistics.

The mechanical team designed a squat, square robot with a pivoting arm. The young engineers improvised parts and borrowed tools to built Stalin.

"I had to learn how to solder parts for our robot," said 17-year-old Kayla Ongpoi. "But I like doing this, it's been very interesting."

Classmate Claire Huang said the robot has been a great learning experience. The 16-year-old junior would like to study biomechanical engineering in college.

"My mother is a hospital nurse, so I'd like to do something in the medical field," Huang said.

Stalin is powered by a 12-volt battery. The electrical system has been designed by the students under team leader Grant Shao.

"I think this is a good introduction to our future. I plan on going into engineering and I've learned a lot from this hands-on project," the 16-year-old junior said.

"We started with an original group of eight students. Then we had to interview 45 other students for the remaining 15 spots on our team," the 17-year-old said.

DBotics spent a year putting their team together. It then had six weeks to construct its robot.

Much of that was spent programming the bot using Nettech software with JAVA, according to adviser Richie Han from Mt. SAC.

"The students had to program their robot to shoot the Frisbees and then collect them," Han said.

Senior Mian Bilal uses joysticks to drive the robot. Bilal can make the Brahmabot spin in place then wheel off in another direction.

DBotics hopes to do as well as Diamond Bar's last robotics team. That team won the regional competition in Long Beach, then went on to the nationals in St. Louis.

This team will also compete in another FIRST contest in Las Vegas on April 3.

Of course, all of this will take more money. Anyone wishing to support the team may send a donation to Team DBotics at Diamond Bar High, 21400 Pathfinder Road, Diamond Bar, CA 91765.

Now if they can only program Stalin to play Frisbee golf.