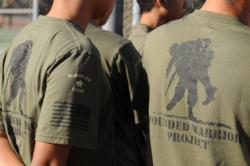 Diamond Bar High School Tennis Coach Dave Hamel is determined to show his players that they have the ability to make a difference beyond the courts.
“I want the boys to know they’re more than just a team of tennis players,” he said. In the past, they held a Haiti earthquake fundraiser to benefit the Red Cross.
This year, they teamed up to support the Wounded Warrior Project.
Hamel said he was inspired to take action after viewing an ESPN story last fall about how wounded veterans lack both the support and financial assistance necessary for rehabilitation and recovery expenses.
“I wanted this group of boys to become aware of what they were capable of doing- not just as a tennis team - but as a group that could reach out far beyond the courts of Diamond Bar and to be significant to others in need. The WWP seemed a perfect fit for this purpose,” he said.
A percentage of the cost of the t-shirts directly supports to the Wounded Warrior fund.
Wearing the shirts while we compete brings attention to this important cause, he said.
The Brahma coach also encouraged his varsity and junior varsity players to wear the cool khaki t-shirts with pride everywhere.
They have received questions and comments from students, community members, and players from other schools, he said.
“Even though our season has just begun, I’ve already received many questions from other players about this organization. The opportunity to raise awareness for such a unique program gives me a much greater appreciation for our veterans and active duty service members,“ said junior Minsong Hsu, #1 ranked doubles player.
“The shirts may not be Diamond Bar purple and gold. But, we just tell people we’re true purple inside while we’re wearing the WWP military Olive Drab Green color,” Hamel said.
The shirts were purchased from UnderArmour, the parent company of the WWP attire. Then the DBHS team added their logo on the sleeve. Hamel said also plans to display a WWP banner on the school’s tennis courts.
Print