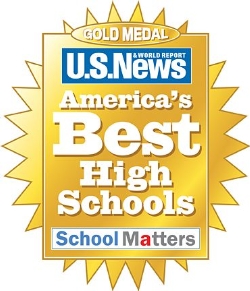 US News & World Report has released their 2013  national and state school rankings.  Below you will find the link for the California high schools.

When compared to ALL California high schools (including special charter and magnet schools) we rank:


If you click on the link: http://www.usnews.com/education/best-high-schools/california/rankings and then uncheck the charter and magnet boxes, you will see that we are the 22nd highest ranked public school in the state!

Great job, students, staff, and parents in building and supporting such a wonderful learning community for our children! If you look closely at how the rankings were compiled, you will see that among other criteria, our school philosophy of open access to AP courses and AP testing has played a big part in how well we ranked.  Not only have we increased access to more AP courses, but we have simultaneously maintained an excellent pass rate.

I am incredibly proud of our school!

Here’s how they ranked each school:

U.S. News's comprehensive rankings methodology is based on the key principles that a great high school must serve all of its students well, not just those who are college-bound, and that it must be able to produce measurable academic outcomes to show the school is successfully educating its student body across a range of performance indicators.

·         The first step determined whether each school's students were performing better than statistically expected for the average student in the state.

·         We then factored in the percentage of economically disadvantaged students (who tend to score lower) enrolled at the school to identify the schools that were performing better than statistical expectations.

·         The second step determined whether the school's least-advantaged students (black, Hispanic and low-income) were performing better than average for similar students in the state.

·         Using Advanced Placement or International Baccalaureate test data as the benchmarks for success, depending on which program was largest at the school.

o   This third step measured which schools produced the best college-level achievement for the highest percentages of their students. This was done by computing a "college readiness index" (CRI) based on the school's AP or IB participation rate (25%) (the number of 12th-grade students in the 2010-2011 academic year who took at least one AP or IB test before or during their senior year, divided by the number of 12th-graders) and how well the students did on those tests.

Click on this link to see DBHS data used in their calculation: