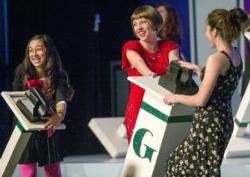 "Thoroughly Modern Millie" is a really big production at Diamond Bar High. It has three different casts with more than 50 actors and actresses, plus twin directors. No wonder, the drama department is adding two more shows for a total of six different performances this weekend and next. While the students may be thoroughly modern with their iPhones and iPods, the play takes us back to 1922, when these gadgets were the stuff of science fiction.
Some would say a simpler time, but whenever it comes to love and life, do things ever really change? The zany musical opens with our ingenue from Kansas moving to the Big Apple to take a bite out of life.
Young Millie Dillmount spreads her wings in New York City, finding frisky flappers and Dapper Dans. And all that jazz! Women were just entering the workforce, changing the rules of social behavior forever. And the young stenographer finds herself on the front lines in Manhattan.
Fortunately, the Brahmas have found two strong actresses for the leading role. Tori Berba and Taylor Lanning may not look alike, but they both bring vibrant voices and verve to the local stage.
We visited the set during a dress rehearsal and found a winsome 18-year-old Berba ready to cast theatrical magic with her wink and a nod of her bobbed head.
As the lights went down, the musical tempo went up as Millie wanders onto a big city backdrop, where she is immediately mugged, losing her hat, purse, coat and a shoe in the process. But this modern woman refuses to give up, launching into "Not For the Life of Me." Tori seems to have a great time in the number, bravely belting out her defiance.
"Tori and Taylor do a great job in the role," said Jared Kaitz, who joins twin brother Jacob in the directing the popular musical.
The two Diamond Bar alumni have returned to help out in the absence of long-time director Peter Bland.
"We jumped at the chance when they asked us. This is a funny musical with lots of comedy," said Jared, an actor at Chance Theater in Los Angeles. Jacob said they began rehearsals at the end of February. He is studying theater at Cal State Fullerton.
Both Millies had to learn how to tap dance for the part. In fact, the tap dancing is an integral part of the show, with up to a dozen dancers hoofing it in some exciting numbers.
"It takes a lot of stamina to sing and tap dance at the same time," said Berba with a laugh.
"I was exhausted by the end of rehearsal last night," agreed Lanning, who comes from a musical family. The 16-year-old junior follows in the footsteps of siblings who have performed in Brahma productions. Her younger sister, Tara, is also in the cast.
Alex Silva plays Jimmy Smith, a young paper clip salesman. This is the 16-year-old sophomore's first big role, but the young tenor is confident that he can handle it. Silva shares the role with Matthew Tanaka and Brandon Wilson.
A Brahma trio plays Miss Dorothy Brown, a new actress from California and Millie's best friend. The part is played by Christina Johnston, Rachel McCown and Diana Power.
And we couldn't finish out our report without giving a nod to senior Ryan Gatus. Gatus has performed in many productions, at least 10 according to his count. The Brahma star will pursue acting and screenwriting at Cal State Fullerton or the American Musical and Dramatic Academy in Los Angeles.
"It's a little scary, but I'm ready to take on a bigger role," Gatus said.
Who knows, maybe he'll write a sequel "Thoroughly Modern Ryan."
"Thoroughly Modern Millie" opens 7 p.m. Friday and Saturday, with a Saturday matinee at 2 p.m. The musical continues at 7 p.m. on May 2-4. Tickets are $14 for adults and $12 for students. For reservations or information, call 909-594-1405, ext. 33276.