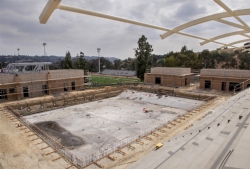 While everything looks peaceful at the front of Diamond Bar High School, the back is abuzz as construction workers rush to complete the new aquatics center and math wing.

"We're way ahead of schedule on the new math building," reported Jeff Bloedorn, director of maintenance and facilities for Walnut Valley Unified.

District officials say the building with 20 classrooms next to the new pool will open in time for the new school year instead of in December. The swim center is still slated to open before Christmas.

"This will give the high school a chance to restructure their departments, moving all the math teachers to their own building," Bloedorn said. "Next year, it will be more like Mt. SAC, where all the English classes are in one building, math in another. "

Josh Hertan, project manager for Novus Construction, explained that the modular classrooms were set into place by crane.

"We just had to stack them into the two-story building and hook up the utility connections," Hertan noted.

The $4 million math wing faces the new aquatic center on the back slope of the high school, next to the football field and tennis courts.

Total construction cost is running on budget at $10.7 million. The money came from bond measures S and Y, passed by voters in November 2007.

The large concrete amphitheater will offer lots of seating for swim meets and other high school events. There will also be wide concrete decking around the 12-lane pool. Half the size of an Olympic pool, the Diamond Bar pool will be much larger than the new swimming pools at Wilson and Los Altos high schools in Hacienda Heights.

Workers were getting ready to pour the concrete into the new pool. Flanking buildings will house athletic offices, bathrooms and pool equipment.

"We've been waiting for a pool for 30 years," said Principal Real in an earlier interview.

Other contractors are finishing up the new artificial turf reinstalled in the high school stadium. The sun was reflecting off the brightly colored field.

"The field fibers were degrading much faster than promised," Bloedorn explained. "The warranty guaranteed the fields for 10 years. "

"Although we had some of the best Bermuda grass fields in the league, we wanted to cut down on the maintenance and water," Bloedorn said.

He said FieldTurf Corporation tried to slow the degradation with a special spray that gave the football field a yellowish color. But that didn't solve the problem.

"FieldTurf has been great," Bloedorn said. "They replaced the Walnut High field over the Christmas break and just finished Diamond Bar's field. They even gave us a higher quality fiber. "

(1) The artificial turf at Diamond Bar High has been replaced under warranty.