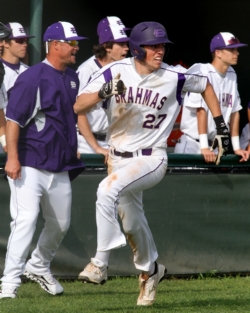 UPDATE: Serra 10, Diamond Bar 2 (Tuesday, May 28)
It was the best season we have had in years. Great job Brahmas!
UPDATE: Our baseball team won their quarter-final game against Gahr High School, Friday, May 25!

Diamond Bar broke on top with a pair of runs in the top of the first inning off Gahr ace Encinas. Nolan Luzzi led off with a double, Marcus Bernardino walked and Zeph Walters ripped a shot over shortstop to give the Brahmas the lead. A double-play ball by Sean Patton scored Bernardino to make it 2-0.
CIF Semifinals will be Tuesday, May 28, at home vs.  Gardena Serra.  Game time will be 3:15.  Wear purple and root the Brahmas on to Dodger Stadium!

It's been a dream season for the Diamond Bar High School baseball team.

The Brahmas look to add to it today when they travel to Gahr for a CIF-Southern Section Division 3 quarterfinal at 3:15 p.m.

Diamond Bar is in the division's elite eight for the first time in more than a decade.

"The team is very excited to make it to the quarterfinals," said Diamond Bar senior pitcher Zeph Walters, who gets the call on the mound. "Returning seven starters and the unity our team shows has contributed to our success.

"Most of us have been playing travel ball together since we were 11 or 12, so we have a great team bond and are jelling at the right time."

They will run into a team which is 22-5 and has won 13 consecutive games. The Gladiators, who advanced with wins over Highland (6-0) and La Quinta (4-0), are led by outfielder Kevin Franklin, who has nine home runs and 37 RBIs.

The Brahmas counter with Walters, who is 10-2 with a 1.15 ERA and also has 11 doubles and 26 RBIs. Sophomore infielder Gerardo Ramirez has 19 RBIs.

"Gahr has proved to be a very good team," Walters said. "We have to play our game. I'm going to have to execute some pitches and not let their key players beat us. We have to minimize our mistakes and take advantage of every opportunity we get."