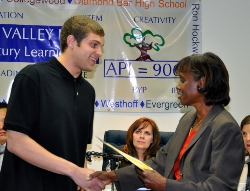 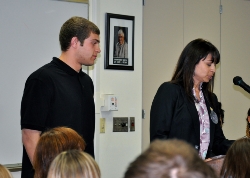 The Walnut Valley Unified School District honored students, teachers, and a community partner during the May 15 board meeting.


Diamond Bar High School honored Evan York as a Super Star Student.  Principal Catherine Real introduced the senior who she described “as a story about growth."


Since his freshman year, Evan had struggled with academic and behavior issues. But this year, he developed a plan with his GLC, coaches, and Diamond Bar staff on what he would like to do as a senior.


“I have seen Evan smile more as he has become a leader over these last 12 months. In fact, everyone can see his growth, athletic talent, maturity, leadership, intelligence, hard work, and tremendous potential that this young man has,” Real described.


“The fact that everyone can see this has made him a new person,” she said.   During his senior year he has maintained a 3.0 - 3.8 GPA, member and starting defensive tackle on the Varsity Football team, was the starting Center of the Varsity Basketball team and helped them reach the 2nd Round of the CIF Playoff for the first time in six years. In just one year on the Basketball team, Evan earned his place as TOP 5 “shot blockers’ in Brahma history, along with Brian Hendricks, Oliver Chamberlain, and former NBA player Keith Van Horn.


“Most importantly, Evan’s experience at Diamond Bar High School has taught the staff some important lessons, or at least reminders. All students deserve a chance to redeem themselves. And even though that student may be 6’2”, 190 lbs., he’s still a kid who needs our guidance in navigating life’s ups and downs. And finally, sometimes the kids who seem to at first like us the least, need us the most,” she said.


During the presentation, Principal Real proudly announced that Evan York was the recipient of the 1st Annual Principal’s Recognition Scholarship for $1,000.