Students Head Off To Top Colleges In The Nation 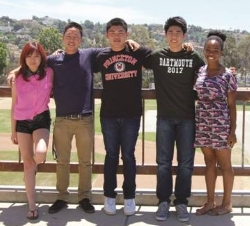 As the school year comes to an end, many seniors are transitioning to the next chapter of their lives. This year, seven exceptional students, Jason Chen, Sarah Cho, Irene Jeon, Jennifer Lim, Chris Park, Udodiri Okwandu, and Hoi Wong will attend Ivy League colleges, proving that hard work and dedication can accomplish great things.

Jason Chen, who received an early acceptance to Princeton University, is planning to major in finance and economics. After obtaining a degree at Princeton, Chen hopes to continue to a business school and earn his Master of Business Administration. Chen is thankful for his time here at DBHS, especially for his golf team, who had been his “second family” throughout his high school years.

Sarah Cho will be attending University of Pennsylvania with a major in English Literature. She intends to change her field of study in the future to branch out and explore her options. She aspires to study criminal law, forensic or clinical psychology, or law enforcement. Cho is excited not only for the great educational reputation the school has, but also the social environment of the big city school.

“It feels sort of surreal because I don’t think I, myself, realized how hard I worked until I finally saw the fruits of my labors. To be honest, there were times that I almost pulled my hair out and felt like sobbing like a baby, but there were a whole lot more times when I slacked off and didn’t do that much,” Cho commented.

Located on the other end of the country, Cornell University in Ithaca, New York will be a new home for a few Brahmas. One of these students is Irene Jeon, who plans to major in psychology. She has always lived by the motto: “study hard, play hard,” which she will continue to follow by performing well in school, while having fun.

Another future Cornell student, Jennifer Lim hopes to become a surgeon. She is thankful for her friends who helped her through the stressful years in high school and is looking forward to the cold New York climate.

Chris Park, who is also attending Cornell, aspires to work in the medical field and become a doctor. His goal is to become more active in hospital-related activities and maintain a good GPA, all while meeting new people and having fun.

Fellow Ivy League student Udodiri Okwandu will be attending Harvard University with a major in Biology and a minor in Spanish. She is also hoping to aid those who are underrepresented or economically deprived of healthcare. Okwandu defines her time in high school as a period in which she was able to push herself to excel in rigorous courses and participate in activities she was passionate about, such as track.

“I chose Harvard because of the vast opportunities that it has to offer. I look forward to taking part in the tradition at the university. It’s also a beautiful place and resembles Hogwarts, which is always a plus. It is not only academically strong but also community-orientated and will provide me with vast alumni networking in the future,” Okwandu stated.

Hoi Wong will be attending Dartmouth College in New Hampshire, studying economics. Wong admires the eclectic group of people in Dartmouth and is confident that Dartmouth will allow him to grow as an individual by meeting new people.

“I think my biggest attribution to getting into college isn’t really academics and the activities itself…. It’s the whole package that includes my unique story, my unique personality, and my unique drive that really got me to where I am now,” Wong stated.