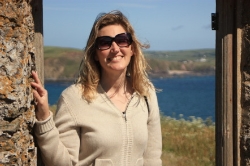 Diamond Bar High School science teacher Angela Jensvold has been selected as a 2013 National Endowment for the Humanities Teacher Scholar.

Angela was chosen from a competitive pool of outstanding teachers from across the nation to attend The Power of Place: Land and Peoples in Appalachia, a three-week institute exploring the rich natural and cultural history of the Appalachian Mountains from July 8-28.

“It was an incredible experience to learn from such renowned experts in the field of Appalachian environmental history. I'm anxious to use the lesson plans I've created.  I will be able to teach environmental issues in Appalachia with more passion now that I've been there and experienced the region firsthand,” Jensvold said.

The award winning PBS series, APPALACHIA: A History of Mountains and People, set the stage for the three-week institute at the University of North Carolina at Asheville. Angela joined leading scholars in the field, as well as some of the region’s most accomplished novelists, poets and filmmakers, for three weeks of intensive research into the intersection of natural history and human history in the Appalachian Mountains.

The approximately 528 NEH Summer Scholars who participate in these programs of study will teach almost 66,000 American students the following year.

PHOTOS:
Diamond Bar High science teacher Angela Jensvold has been named a 2013 National Endowment for the Humanities Teacher Scholar. This summer, she attended a three-week institute exploring the rich history of the Appalachian Mountains.
Jensvold, shown at front left, with teachers from around the country visited the cradle of forestry, an old one-room schoolhouse at the first school of forestry in the United States.
Print