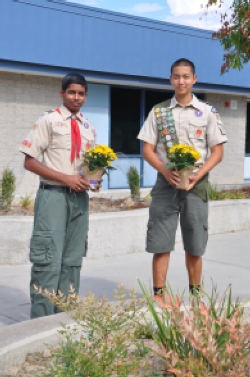 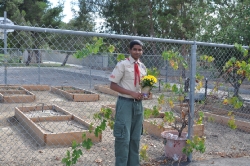 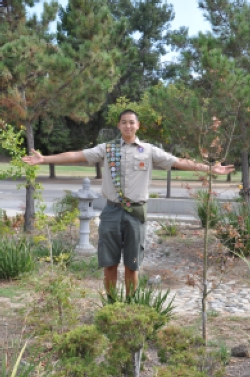 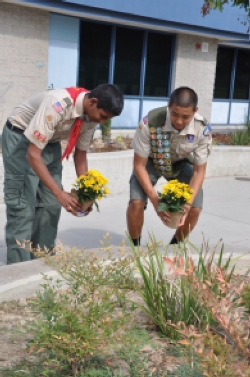 In just four years, they are on they way to become Eagle Scouts, the highest rank possible. Only about five percent of all Boy Scouts earn this top award.

Although they are in different troops, both Boy Scouts happened to choose the same location for their community service project – Quail Summit Elementary School in Diamond Bar.

While walking around the campus he noticed the planters seemed bare and thought he could help.

Lim raised $2,000 in donations and recycling for the garden project that included clearing and planting new flowers, shrubs, trees and even a few bushes in the shapes of animals.

About 30 volunteers including members from his Boy Scout Troop 278 and friends pitched and completed the one-day project on the “hottest day in summer,” the 16 year-old said.

Now that the students are back to school, Lim hopes they like his work.

“I put the animal plants to make the kids happy so they could appreciate it. I added some color and a lot greenery. I feel like it’s good,” he said.

He also has a connection with Quail Summit - his sister currently attends the school.

“I looked at the garden and figured out that this would be a good project,” the 16 year-old said.

“They had ten planter beds, but it was really a mess,” he explained. The scout had the help of his Eagle mentor Tom Peterson to design the kindergarten garden clean up.

About 25 volunteers including members from Ponnaganti’s Boy Scout Troop #737, DB 4 Youth and several family members helped with the project completed on August 10.

“It was originally planned for two days, but I knew we could finish in one day,” he said.

A new crop of Quail Summit kindergarteners will be planting seeds this year.

“We appreciate the generosity of these students and our community. It really does take a village to keep a bustling school beautiful!” said Principal Dr. Alysia Hobbs-Odipo.

“These two young men have given a wonderful gift to our students and school. They've also learned the importance of giving back to their community," said Board President Helen Hall.

Both Boy Scouts said being involved in the organization been a very meaningful experience and they’ve learned a lot about service, teamwork and communication. Ponnaganti is currently the Senior Patrol Leader and is scheduled to complete his Eagle rank in about two months.

Lim aspires to attend West Point Military Academy and Ponnaganti plans to become a computer programmer. He has already designed an android App through the DBHS Brahma Tech Academy.

The Scouts will be recognized for their work during a Quail Summit Spirit Assembly on September 30.
Print