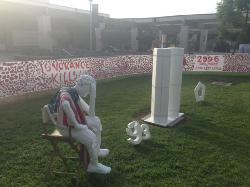 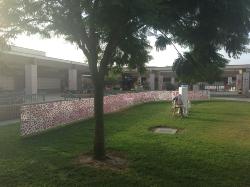 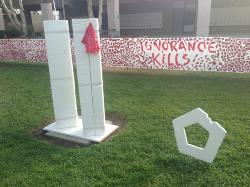 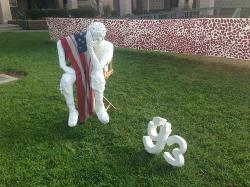 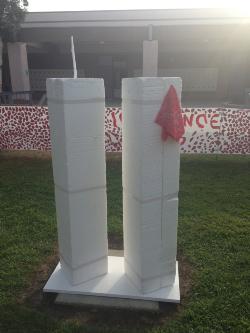 
Like the stained glass windows of a Gothic cathedral, the paper filtered the light of the 75-foot-long tribute to 9/11 at Diamond Bar High Schools. The teen artists had placed nearly 3,000 pieces of cut paper to represent the souls lost on that tragic day.

The 4-foot-high wall fenced in the 9/11 sculptures made over the years by students in Dave Hamel’s art classes. The stark white sculptures represented the Twin Towers, Pentagon and Flight 93.

“I thought the students needed a visual reminder of that day,” Hamel said. “So I asked my students to make some artwork to place out in the student quad.”

This year, the students added the paper wall to give classmates an idea of how many people lost their lives in the terrorist attacks. It was as if the entire 3,000 student body had been slain on the same day.

“The concept came to me in a dream. So I had my student artists each cut out 300 pieces of paper,” Hamel explained. “I told them that each piece represented one life.”

The 9/11 project had a telling effect on freshman Darlene Cid. The pensive 13-year-old watched closely as Hamel talked about the sculptures.

“It’s very, very tragic,” Cid said. “My friend in Rowland Heights lost her aunt in one of the Twin Towers. It was very sad.”

Little wonder that the Brahma was taking the tribute so seriously.

“It’s nice that 9/11 is still getting recognition at our high school,” Lee said. “I think this project has a lot of meaning behind it.”

Bibida pointed out the words “Ignorance kills” in the middle of the wall. The freshman agreed that misunderstanding a culture or religion can lead to tragic consequences.

“I wanted my students to think about how misunderstandings hurt us on both the global and personal levels,” Hamel said.

One of the most impressive pieces of artwork is a life-sized model of a young man sitting in a chair. The faux student holds his head in his hand as he seems to ponder his future.

“The young man is one of my favorite student pieces, so I’ve kept it over the years. I thought it was perfect for the 9/11 tribute, because it can be interpreted in many ways,” Hamel explained in an earlier interview.

The sculpture had been made in his Fundamentals of Art class. The young artists created the statue by bending chicken wire around a student model. Later the wire sculpture was covered with white papier-mache.

The Twin Towers were built from large blocks of white foam. A red bandanna was attached to the South Tower.

“Before I came to school one day, I watched a story about a young 9/11 hero on ESPN,” Hamel said. “He became known as the man in the red bandanna.”

Welles Crowther worked on the 104th floor of the South Tower. After the plane hit, witnesses said Crowther covered his mouth with a red bandanna to help him breathe. Witnesses say he saved at least a dozen people, re-entering the building at least three times to rescue people. Crowther was on his way back up the South Tower when it collapsed.

“All the rescued people could see of him in the smoke was his red bandana,” Hamel said. “I wanted to honor Welles, so I put a red bandanna on our 9/11 tribute.”

The Diamond Bar instructor brings his classes out to the quad on Sept. 11 to tell Crowther’s heroic story to all his classes and asked them to share the story with their friends.

“I wanted them to think about all the 9/11 rescuers who never made it out,” Hamel said.