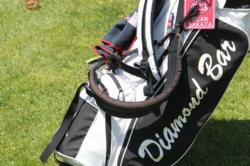 When Bethany Wu returned to classes at Diamond Bar High School last Monday, the junior could not show off a blue first-place medallion hanging from her letterman’s jacket.

The golfer could not even carry the San Clemente tournament trophy into a classroom without a lot of help. It is a giant sandal and Wu was able to lug the gigantic trophy home after shooting a 4-under-par 69 and winning the tournament at San Clemente Municipal Golf Course by two strokes.

Wu took second to Torrey Pines’ Minjia Luo last year and McCabe said that when she saw the winning prize last year, she was bound and determine to have it displayed on her trophy case this year.

“This was a little measure before we meet in the state semis, if we get there,” McCabe said. “It is always a challenge and never easy. These teams are good.”

The Brahmas and the Hacienda League have been moved into the CIF-Southern Section Northern Division, which means they will likely face Notre Dame again on Oct. 31 in the division finals.

Diamond Bar has more than Torrey Pines and Notre Dame to worry about. The Brahmas have already faced Walnut in league play and they split their matches, the Brahmas winning by one stroke and the Mustangs getting the split last week at Royal Vista with Walnut junior Patricia Wong shooting a 32 for nine holes for the Mustangs’ three-shot win.

“They really put it to us,” McCabe said.

The Brahmas were without Josephine Chang, who was sick. McCabe said it would not have made a difference. On Tuesday, Chang, a sophomore, shot a 33 in a league win over Rowland at Diamond Bar, only one stroke off the school record. She nearly had a hole-in-one when her shot hit the pin and landed a foot away.

Diamond Bar and Walnut will only meet again in tournaments, although they will face off in individual events. Presuming each wins out, they will again tie for the league title.