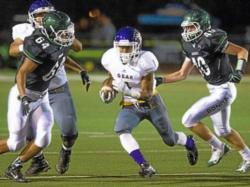 
The Hacienda League opener between Diamond Bar and Bonita at Glenn Davis Stadium figured to be a high-scoring affair, with each boasting a quality quarterback in charge of an up-tempo offense. It was. This time it was the visiting Brahmas getting the better of the Bearcats and surging out to a 49-26 lead on Friday night.

“We thought it would be like this with both teams having up-tempo offense and it was going to be a matter of which team got the momentum and the late surge,” Diamond Bar coach Ryan Maine said. “We happened to be that team tonight.”

Diamond Bar surged out to a quick 13-0 lead getting field goals of 32 and 27 yards from Nolan Luzzi. The Brahmas could have easily had more but had drives stall at the Bonita 15 and 11.

Diamond Bar finally registered the game’s first touchdown early in the second when quarterback Tyler Peterson plowed in from the 2.

The Bearcats managed the next two scores, the first coming when Tanner Diebold ran it in from the 10 with 6:58 left in the second quarter.

The Brahmas failed to get a first down on their next possession and the Bearcats got the go-ahead score soon after they got the ball. This one came courtesy of the big play as Jake Payton broke loose on the third play for a 33-yard jaunt that gave the home team the lead for the first time at 14-13.

But that lead was short-lived. Diamond Bar scored on its next try, also aided by the big play. It was Tyler Brown running it in from 46 yards out with 3:31 left in the half. The kick made it 20-14.

Then came a mistake that opened the door for Diamond Bar as Payton fumbled the ensuing kickoff. The Brahmas pounced on the ball at the 20 and capitalized three plays later, going up 26-14 on a 27-yard strike from Peterson to Coredell Broadus.

Just when Bonita seemed to get back in it, the Brahmas answered. Bonita cut the deficit to 26-20 with Payton running it in, this time from the 11.

Then on the ensuing kickoff Tyler Brown raced 91 yards for a touchdown to boost the lead back to 33-20. Bonita was never in striking distance again.

The bright spot for the Bearcats was the play of Payton, who tweaked a knee last week. He had 19 carries for 84 yards and caught nine passes for 63 yards. He had three touchdowns, two rushing, one receiving.

aine was pleased to start league play with a win.

“We call it the gauntlet and that was the first one so it feels good,” he said. “It won’t get any easier next week.”

Next week Bonita will play at Rowland, while Diamond Bar will be at home against West Covina.